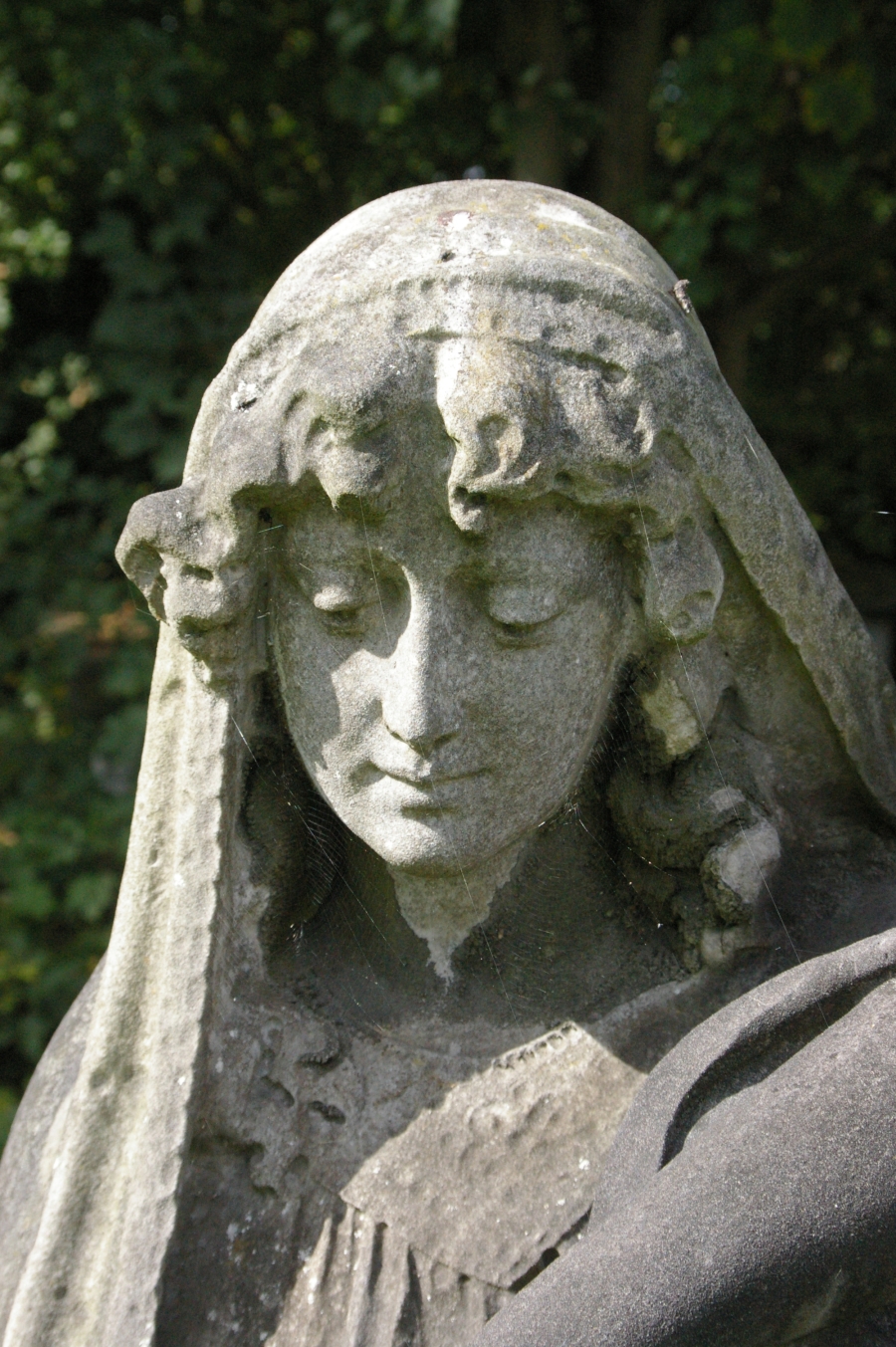 This month’s symbol is the Mourning Woman who is derived from Classicism and its association with ancient Greece and Rome.  I would hesitate before describing their presence in Victorian cemeteries and churchyards as a monstrous regiment but they have mostly been on duty for over a hundred years.  They patiently watch over and grieve for the departed.  An eternal mourner, often with a veil covering her head and swathed in flowing robes, she keeps vigil.

The Mourning Woman can be a free standing statue on top of a monument or plinth looking sorrowfully down on the viewer.  She can also be in the form of a 3D relief weeping over an urn containing the beloved’s ashes as in these examples:

At West Norwood cemetery there is this example of one resting on a lifesize cross (I hate to say it but whenever I see her I’m always reminded of the George Formby song ‘I’m Leaning on a lamp post…etc.).

Classicism held sway when London’s Magnificent Seven cemeteries were created. The anti-Catholic movement from the Georgian era was still a major influence with the cry ‘No Popery!’ loudly shouted.   So no crosses, no statues of Jesus or any angels were permitted.  Instead the clear cool lines of the ancient world were used as well as some of their traditions.

Mourning women were one of these as women played an integral part in the funerary ritual in ancient Egypt, Greece and Rome.   In the latter they were paid professional mourners as the more mourners there were at a funeral the more wealthy and prestigious the departed had been in life.  In the funeral procession which took place prior to the cremation the professional mourning women, who were not part of the deceased’s family, would loudly wail, rip out their hair and also scratch their faces in mourning according to contemporary records.  It was felt that women could more easily express emotions as it was unacceptable for a man to weep in public.

There are several Biblical references to the mourning women.  They are mentioned in Amos 5:16, Chronicles 35:25 and also in Jeremiah 9:17 as below

Thus saith the LORD of hosts,

Consider ye, and call for the mourning women,

that they may come;

and send for cunning women, that they may come:
King James Bible

They would often weep noisily and copiously spilling their tears into vessels known as tear catchers or lachrimosa.  At the recent excellent Museum of Docklands exhibition, The Roman Dead, there were some on display.  They were small glass vessels and were placed in tombs, presumably overflowing, after the funeral was complete. Again, if many tears were collected, it signified that the deceased was held in high esteem and those crying the most would receive a higher payment.

Incidentally the tear catchers became fashionable again in the 19th century with the Victorian cult of death.  But this time the bottles had special stoppers that allowed the tears to evaporate and when they did the mourning period would be over.  There is also a Biblical association with the practice of collecting tears in bottles in Psalms 56:8:

Thou tellest my wanderings:

put thou my tears into thy bottle:

are they not in thy book?

In ancient Greece it was again women who prepared the body and then laid it out ready for viewing on the second day.

Kinswomen, wrapped in dark robes, stood round the bier, the chief mourner, either mother or wife, was at the head, and others behind. This part of the funeral rites wasthe prothesis. Women led the mourning by chanting dirges, tearing at their hair and clothing, and striking their torso, particularly their breasts.

So for centuries women have been associated with, and played a major part, in the funerary process which may have been one of the reasons for the Mourning Woman appearing in cemeteries.

I feel that these women could be seen as a forerunner of the winged angels that flew into cemeteries towards the end of the 19th century.  Both of them were guardians of the dead protecting them for eternity.

To end on, here is an lovely example that I unexpectedly discovered while on a Sunday afternoon stroll in the ‘secret’ graveyard behind St Nicholas’s church in Sevenoaks.  She stands, surrounded by back gardens, and is a particularly elegant version.  The memorial beneath her feet is dedicated to Elizabeth Dick and was erected by her sorrowing husband.

Sleep well for eternity Elizabeth and all those guarded by the mourning women.

2 thoughts on “Symbol of the Month – The Mourning Woman”