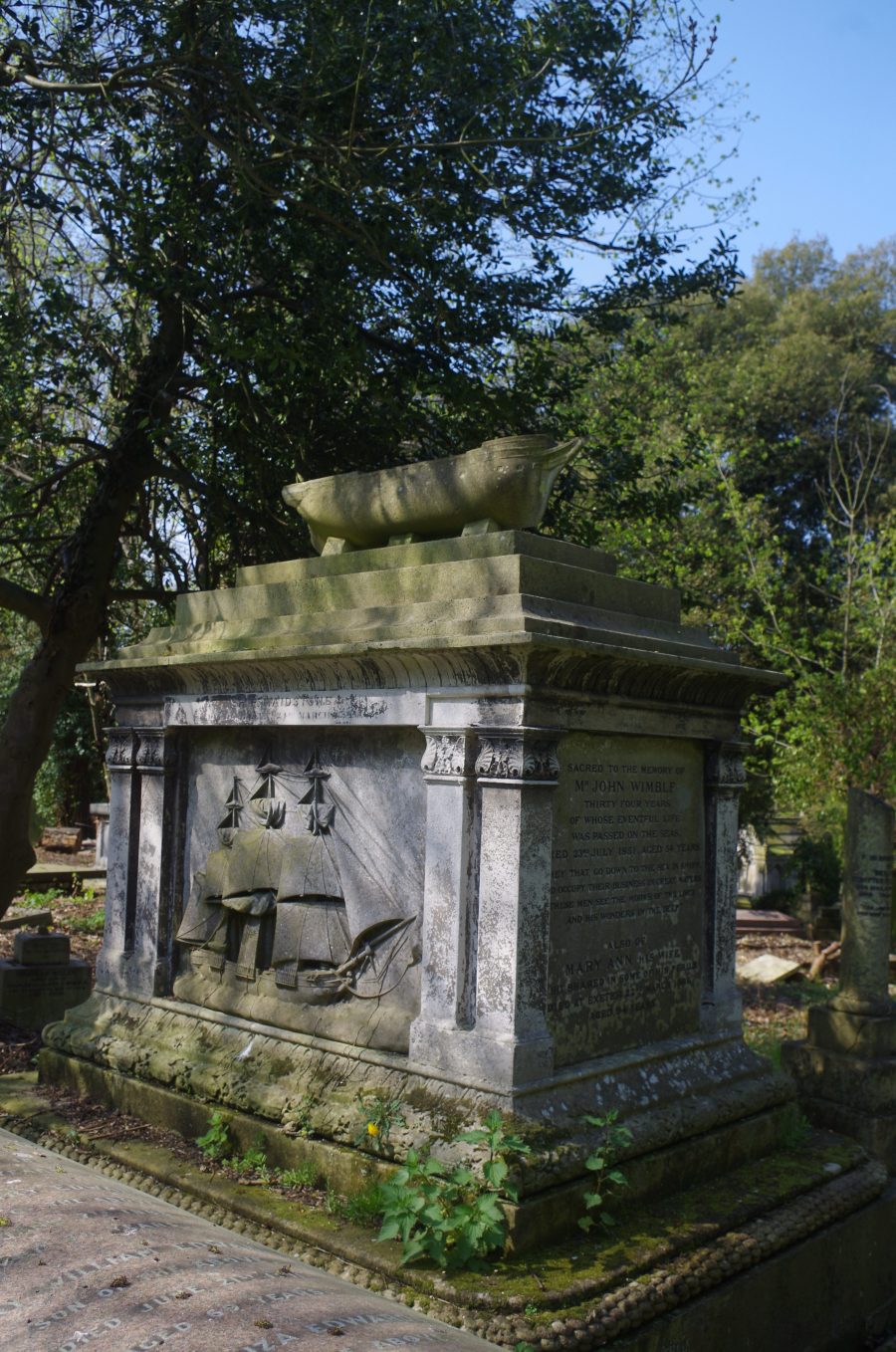 There is a clearing along Ship Path in West Norwood Cemetery where, if you pause for a moment, you could almost swear that you can smell the sea.  For a moment you can hear the ceaseless ebb and flow of the tides, the relentless cries of seagulls and the smell of ozone.

Then you’ll probably be standing in front of the exuberant and flamboyant monument to Captain Wimble (1797-1851) and his indomitable wife.  He was an employee of the East India Company and, Mary Ann, his wife, accompanied him on his many voyages which demonstrates that Captain Wimble didn’t subscribe to the old seafaring tradition that it’s unlucky to have a woman on board.  However, as sea voyages at the time could take over a year perhaps it was the only way that they could see each other.  He was born in 1797 and baptised at All Saints parish church, Maidstone in March of that year. Capt Wimble would have probably first gone to sea aged 12 or 13 and he was obviously ambitious. The East India Company who were extremely powerful and held a monopoly on the trade with India in importing items such as cotton and opium.  They were a precursor of the British administration in India. At 23, he became a ship’s captain with the Company by fulfilling their criteria and so his seafaring career began.

However, it’s immediately obvious that the monument is to a seafaring man. A boat, now sadly damaged, perches on top of the chest tomb.  It used to have iron masts but I have been unable to locate a photo with the ship intact. The nearest one is dated from 1968. Here is the link: https://www.architecture.com/image-library/RIBApix/image-information/poster/west-norwood-cemetery-london-the-sarcophagus-of-captain-john-wimble-decorated-with-ship-reliefs/posterid/RIBA48791.html

The epitaph on the front records his deeds and as you walk around you will see a sailing ship on each side.  They are still impressive and dramatic and the still crisp carving emphasises the sea scenes.  You almost feel that they could sail away at any moment.  These were all ships that Capt Wimble commanded. A sculptured length of rope decorates the base of the monument as a frieze.

On the east side is a 3 masted ship, the Maidstone, with furled topsails on a clam sea and is dated 24 June 1840.  He captained this ship on a round the world voyage in 1840.  It travelled to Calcutta, then New Zealand, onto New Jersey and then finally New York. The Maidstone, all 818 tons of her, was built in 1839 at the Blackwall Yard in London and owned by Green and Wigram. She was intended for the London – Bengal and London-Calcutta routes and was last recorded in 1860 when she was abandoned on the way to Australia. There is a painting of her in the National Maritime Museum.

The Florentia is depicted on the south side in stormy weather off the Cape on 24 June 1825 and to the west is the London, dramatically and perilously sailing in heavy seas with a broken mast off Gangam and this is dated 6th October 1832. Gangam is   a coastal district of Orissa in India which East India Company  ships would have passed through on their way to Calcutta.  The Florentia was the first ship that he captained and he would have sailed to the island of Madeira near Tenerife, turned towards Brazil for supplies, then onto South Africa and onto India.

The three scenes emphasise the unpredictable ups and downs of a sea captain’s life which was completely at the mercy of the weather at that time.   There is a fulsome epitaph to the Wimbles on the north side of the monument:

‘Sacred to the memory of Mr John Wimble,

34 years of whose life was passed on the

that go down to the seas in ships and occupy

their business in great waters; these men see the works

of the Lord and his wonders in the deep.’

Also of Mary Ann his wife who shared in some

Capt Wimble was clearly a man of substance as this unique and imposing monument demonstrates.  It may be more than coincidence that Capt Wimble’s first ship as Master was called the Maidstone. He was born in the town of that name and when he retired he named his house in Upper Tulse Hill Maidstone Cottage. In the first Census taken in 1851 he was recorded as living at that address with Mary Ann, then aged 54, and two servants, Mary Iles and Elizabeth Sheffield, both aged 26. He died at Maidstone Cottage in 1851 with the cause stated as ‘heart disease’.

As you might have guessed by the size of the tomb and the quality of the bas-reliefs Capt Wimble was a man of means as it was the custom for wealthy travellers to give the captain of their ship expensive gifts at the end of the voyage.

I am indebted to Eloise Akpan’s 2005 article in The Norwood Review for the details of his will and also the Friends of West Norwood Cemetery’s newsletter, September 2020 for the details on his will and ships.   Capt Wimble’s will was signed 9 months prior to his death and in it he specified the intended destination of ‘every bit of his clothing, jewellery and furniture’, as well as the money. The debts of the relatives to which he lent money are all erased. As a result of the generosity of his well-heeled passengers there was an impressive collection of gold and silver items including 6 silver candlesticks.  These came down to a descendant of John’s brother, Charles. This was Derek Wimble who lived in Herne Hill until his death roughly 36 years ago.  The candlesticks with an accompanying candle snuffer were subsequently sold by his widow with an engraved inscription that stated they had been

‘given by the grateful passengers on a homeward voyage from Calcutta to London in 1840.’

Sadly, Derek had no idea that his illustrious ancestor was buried nearby which is sad.

Mary Ann was a woman of her own mind. The will also stipulated that ‘

‘I direct that my body may be decently and plainly interred at the discretion of my beloved wife. She alone shall have the ordering and regulation.’

Perhaps she had her own interpretation of this and so she created a magnificent monument to her husband and herself which is one of the most attractive and imposing within West Norwood.

An interesting postscript to this was in the Friends of West Norwood Cemetery’s 2010 newsletter in which the headstone and grave of a William Wimble had been located close to Capt Wimble’s.  William had also been born in Maidstone – a possible relative?

Sadly, I have been unable to find an image of either Captain Wimble or Mary-Ann which would have enabled me to put faces to them.  The monument is due to restoration this year and I am looking forward to seeing the results.

But I’m sure that when I next visit that I will still hear and feel sea breezes as I walk towards it along Ship Path.

https://www.fownc.org/pdf/newsletter69.pdf – this contains information about Capt Wimble’s ships, voyages and will.