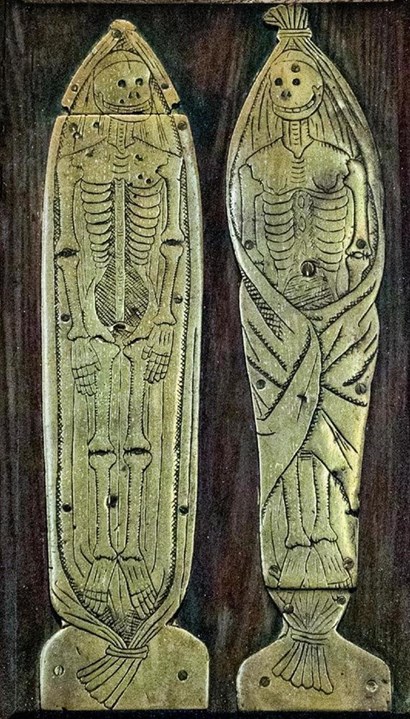 This month’s symbol is a rare one and I discovered it in my local churchyard, St Nicholas in Sevenoaks. It’s on the grave of the Beckley family.

However, I have also previously seen crosses with real cloth draped on them in two big London cemeteries One was in the Greek Section of West Norwood.  At that time I thought that perhaps it was to commemorate an anniversary or a particular religious festival. However, during my research for this post. I have discovered that the colour of the   West Norwood cloth, white,  is associated with Easter Sunday.

As you can see from the above photo of the Beckley headstone, the cloth is wrapped loosely around the cross  and, according to my research, it’s a resurrection symbol.  In fact it’s known as the Resurrection Cross or the Shrouded Cross. Some of its other names are: the Draped Cross, the Empty Cross, the Risen Cross or the Deposition Cross. The latter is a further reminder of Christ’s descent from the cross

It’s intended to be a representation of Jesus no longer being on the cross. Although there are also plain crosses on graves unless they have the cloth they are not Resurrection crosses. The cloth is a supposed reference to Christ’s grave clothes or shroud that were found in the tomb after he rose from the dead. It emphasises to the bereaved left behind that death isn’t the end.

Within the church calendar, the cloth draped around a cross during important dates in the Christian calendar particularly Easter has special significance according the colours of the fabric. These are white, purple – the colour of royalty, and black.  The latter is used from Palm Sunday (the week prior to Easter) until Good Friday and denotes mourning after Christ’s death on the cross.

The shrouded cross on the Beckley headstone is a striking image which caught my attention and really stood out in a churchyard containing several headstones with fascinating symbols on them.

So this one may be an affirmation of faith on behalf of the deceased  or a strong belief in the afterlife with death being seen as the beginning of a new life.