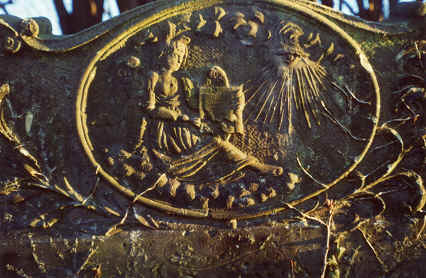 I featured part of this symbol on the Caryer headstone in an earlier Symbol of the Month – the All seeing Eye.    The Kent Archaeological Society website had given me the epitaph and also a reference to the Woman of Samaria with a  question mark next to it.

In March 2020, I visited All Saints, Frindsbury where the Caryer headstone is and looked at it and my photos and wasn’t quite sure if they were right.   Then I looked again at their photo of it taken in 2011 and what a difference 9 years makes!

As you can see, erosion has blurred a lot of the fine detail seen in the 2011 photo and it’s now hard to make out the image of the woman with such clarity now.  It doesn’t help that the headstone is leaning over so making it quite hard to get a decent photo.    In the 2020 image some of the detail has been lost. The stone is darker but. despite the erosion, it is a wonderful example of the stone carver’s art and skill.  This would have been an expensive headstone.

So what have we got? In the 2011 photo, A glamorous, somewhat scantily clad woman who was really well carved. She wears classical style diaphanous robes and wisps of lie across her exposed leg. She has her hair up in a Classical hairstyle and is sitting side on to the viewer wearing a pensive expression. She seems to be sitting on pebbles – is she at a river or at a beach? She holds a water jug and there are clouds above her.  The all seeing eye of God is on the other side of the headstone which may have been comforting to those left behind.

The reference to the Woman from Samaria being a possible source  is. I think, that the lady is holding a water jug and seems to be near water. So does she carry the waters of eternal life that Christ promised in the Bible? Or is she just a scantily clad woman holding a water jug?

The Woman from Samaria appears in the Gospel of John 4: verses 4-26.   Here they are:

There cometh a woman of Samaria to draw water: Jesus saith unto her, Give me to drink.

(For his disciples were gone away unto the city to buy meat.)

Then saith the woman of Samaria unto him, How is it that thou, being a Jew, askest drink of me, which am a woman of Samaria? for the Jews have no dealings with the Samaritans.

Jesus answered and said unto her, If thou knewest the gift of God, and who it is that saith to thee, Give me to drink; thou wouldest have asked of him, and he would have given thee living water.

The woman saith unto him, Sir, thou hast nothing to draw with, and the well is deep: from whence then hast thou that living water?

Art thou greater than our father Jacob, which gave us the well, and drank thereof himself, and his children, and his cattle?

Jesus answered and said unto her, Whosoever drinketh of this water shall thirst again:

The woman saith unto him, Sir, give me this water, that I thirst not, neither come hither to draw. King James Version

The meeting between the woman and Christ has inspired many artists and here are two interpretations.   But I had my doubts.   For instance, there’s no well visible on the headstone and, although she could be seen as bathing in the water of eternal life, the living waters referred to in the Bible, with a clear reference to resurrection it just didn’t feel right.   It also felt a bit tortuous to try and fit it all in.

But there are other images of female water bearers and one of the most obvious is associated with the Zodiac sign of Aquarius.  She is often depicted holding a water jug aloft or pouring from it.  But no, I carried on looking. Sometimes researching symbols is like detective work!

But there is another symbol that involves a woman as water bearer and that is the Zodiac sign of Aquarius.  In fact it is known as the water bearer.

However, there is also the Greek goddess, Hebe, or the cup bearer. She was the daughter of Zeus and was the cupbearer for the gods and goddesses of Mount Olympus.  Hebe served nectar and ambrosia to them until she married Heracles.  She also had influence over eternal youth and the ability to restore youth to mortals.  In fact, Hebe comes from the Greek word meaning youth or prime of life.

She was a popular subject in art during 1750-1880 and that would fit in with the date of the headstone. Hannah was the first to buried there and she died in 1809.   There many depictions of Hebe and in fact it was well known that all that was needed to summon her was a floaty white dress, some flowers in the hair and cup to hold. A setting in the clouds helped as well and maybe our Frindsbury lady isn’t sitting on pebbles but on puffy clouds.  In some portraits of Hebe a degree of nudity was allowed.    She was often depicted with wings which can be seen behind the figure on the headstone.  In art Hebe often appears with an eagle. Hebe also had her own personal cult and figures of her were popular in the 19th and early 20th centuries for fountains.

So I think that the figure is a classical one and probably based on Hebe.  Our glamorous lady in the floating draperies may be a reference to the deceased always remaining eternally young in death.  Hannah was only 30 when she died but that wasn’t unusual in an age of low mortality.   She is protected by the watchful Eye of God. It’s interesting to see a pagan symbol beside a more conventionally Christian one.

We will never know the inspiration behind the image used on this headstone.   It may have been skillfully copied from a printed image or painting and may have had personal significance to her husband who is also buried there together with their young son.  It would have been the height  of Classicism and it’s interesting to find it in a country churchyard.  It is sad to see much it has eroded over the years but one see the confidence of stone masons at that time in tackling subjects such as this.

So, in my opinion, our lady may not be the Woman from Samaria but a representation of Hebe.  But of course she could just be another elegant lady showing a bit of leg as she sits for all eternity above the Caryer family.