This is a post from Atlas Obscura which discusses the burial places of large institutions in the US which were left behind when they closed. Patients records may have been lost and when they are buried anonymously how do their families know where they are? When I visited Netherne Hospital cemetery and also St Lawrence’s burial ground, there were very few markers but in recent years relatives have been reclaiming their loved ones. I thought this was an interesting post in light of disability rights campaigns. It also reminds us that these people are not fogotten.

Historically, institutions often interred their dead with simple markers. In Massachusetts, researchers are learning about the patients’ lives and the facilities’ fraught legacies. 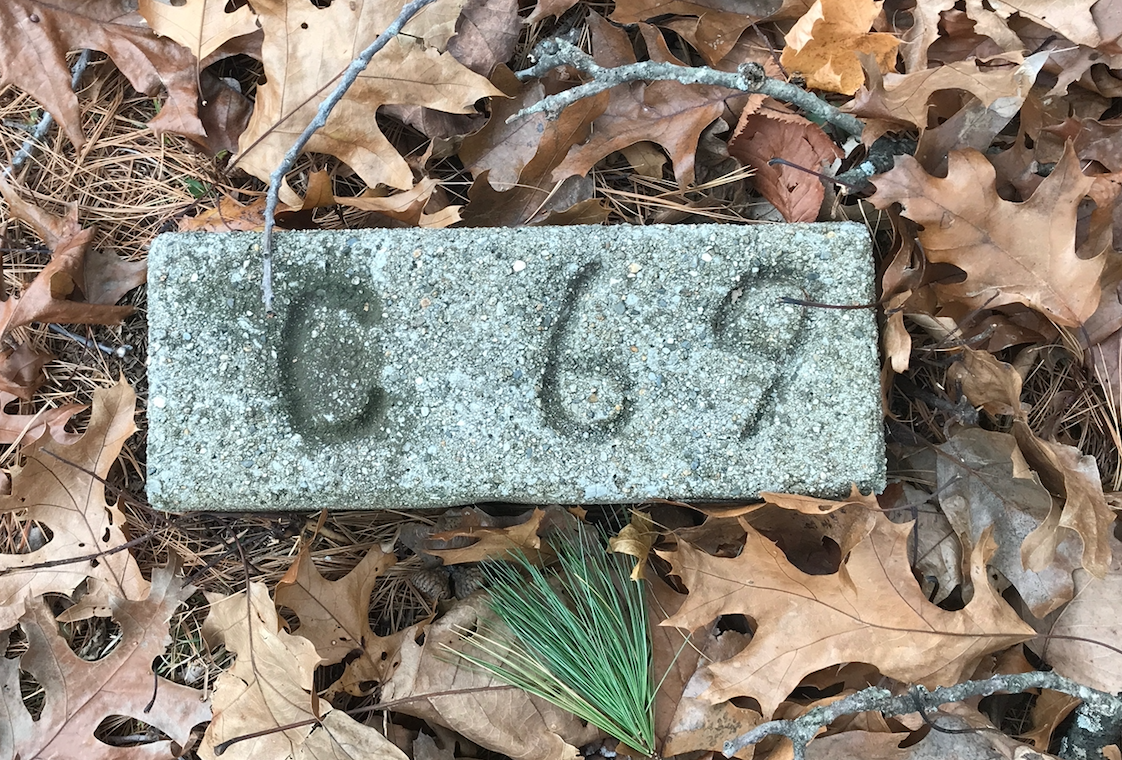 This marker in the MetFern Cemetery denotes the burial of Robert Comeau (1943-1959). ASIA LONDON PALOMBAIn This StoryDESTINATION GUIDEWaltham

IT’S QUIET. The afternoon sky is draped in a blanket of clouds and a breeze weaves its way through the trees. Down a winding dirt path in the woods of Waltham, Massachusetts, is a clearing peppered with hundreds of small, gray slabs of concrete. They sink into the earth as if pulled down by invisible hands.

These uneven stumbling stones serve as crass grave markers for the hundreds of people who died in two nearby institutions for people with disabilities. The cemetery is shared by the Metropolitan State Hospital, a former psychiatric hospital, and the Walter E. Fernald Developmental Center, the oldest state-run institution of its kind in the United States.

Between 1947 and 1979, these institutions buried 296 of their patients in simple, anonymous graves on a plot of former marshland now called the MetFern Cemetery, a portmanteau of the two institutions’ names. The grave markers are sunken and toppled, and have only two things etched onto their concrete slabs: “C” or “P,” for Catholic and Protestant (though records indicate that a Muslim man and two Jewish patients may have been buried there as well), and a number that denotes the order in which the patient was interred.

For the past seven years, Alex Green, a local disability historian, has worked to identify and research the lives of those buried at MetFern. By combing through birth and death certificates, he has come to know their names and stories. Today, most of Green’s advocacy focuses on working alongside the state to make the cemetery more dignified.RELATEDWhen Chinese Americans Were Blamed for 19th-Century Epidemics, They Built Their Own HospitalThe Chinese Hospital in San Francisco is still one-of-a-kind.Read more

The burial ground is a powerful symbol for the people who grappled with the institutions’ legacies. “It kind of provides a safe, central place where everyone agrees to come back together around it,” says Green, an adjunct lecturer in public policy at Harvard University. “People are sharing stories more for the first time.”

THE WALTER E. FERNALD DEVELOPMENTAL Center, also referred to as the Fernald School, was originally called the Massachusetts School for Idiotic and Feeble-Minded Youth. Founded in South Boston in 1848 by Samuel Gridley Howe, it opened as a small experimental school to teach children and teens with intellectual disabilities life skills so they could live independently. Due to the popular perception that children with disabilities couldn’t learn, it proved to be the most progressive and radical institution of its era, says Green.

By 1888, the institution had moved to a sprawling, 196-acre campus in Waltham under the direction of superintendent Walter E. Fernald, where it quickly became the model for other institutions in the state and country. By the late 19th century, Fernald had become a custodial facility where those with disabilities might be locked away for life.

The national peak of institutionalization for those with intellectual and developmental disabilities in the U.S. was in 1967, when nearly 200,000 people were incarcerated in more than 350 large, state-run institutions. An additional 30,000 people were living in state psychiatric facilities, according to the National Council on Disability, an advisory agency on disability policy.

The Metropolitan State Hospital, also known as MetState, opened in 1930 and was the state’s last large-scale institution. Between 1924 and 1947, patients were buried in Waltham’s Mt. Feake Cemetery or were sent back to their original towns—though some are unaccounted for, and Green suspects there were additional burials around the institutions’ grounds. By 1947, both the Fernald School and MetState had fallen apart, and would eventually shutter (MetState in 1992, and Fernald in 2014). The onset of major crises such as the Great Depression and both World Wars caused the institutions to become severely underfunded and short-staffed. As conditions declined, an increasing number of patients suffered premature deaths, leading the institutions to open a shared cemetery, says Green.

Patients were buried in institutional cemeteries for a number of reasons. Some had no living family or couldn’t afford a proper burial. Institutions usually did a haphazard job of contacting family members about deaths, and in many cases families didn’t make an effort to collect their relative’s body. The unnamed gravestones were likely a measure taken to protect a family’s reputation in an era of overwhelming social stigma surrounding disabilities.

This was the case at similar institutions all over the state and country, and in the past few years, grassroots movements have been gaining traction from Utah to Minnesota to Georgia, aiming to bring recognition and justice to those buried under unnamed graves. These movements emphasize marking and preserving the final resting grounds of institutional patients.

“To ask for this history is not enough.”

Adam Rosenblatt, a professor at Duke University, has been studying this phenomenon for a book he’s writing—titled Cemetery Citizens and slated for publication in 2022—on people who care for places of the marginalized dead. One of his chapters focuses specifically on MetFern.

“The movement to try to commemorate mental hospital cemeteries is something that’s been around since the 1990s and seems to be slowly but gradually spreading,” he says. “There is a desire to contextualize and commemorate….even by just filling in the gaps on sites like findagrave.com with pictures of each grave.” Rosenblatt says there’s now “a lot of energy” around unearthing information and restoring dignity to deceased people who have long been overlooked.

SOME OF GREEN’S ACTIVISM INVOLVES working alongside students—especially 11th graders he once taught part-time at Gann Academy, an independent Jewish high school tucked between Fernald and MetFern. In 2017, Green, Yoni Kadden, and Kevin Levin—two history teachers at Gann—created a disability history curriculum focused on MetFern, Fernald, and MetState. Over the years, students have parceled through census data to research the individual lives of those buried at MetFern. In 2020, the students created a memorial book and an official website, coded by a 2020 Gann graduate, to house the names and biographies of each person buried in the cemetery. The website led to some relatives finally learning where their loved ones are buried after decades of speculation. In this way, these institutional cemeteries are “two-way streets to the past and into the present,” Green says. “They help [us] process the trauma and grief around them.”

When students learned about the burial ground’s legacy they “were horrified. They wanted to know more,” says Kadden. “A lot of them tied this to our responsibility to talk about other injustices.” Kadden will be leading another disability history class at Gann in the fall of 2021.

The work surrounding MetFern echoes elements of the deinstitutionalization movement that gained steam in the early 1970s. The movement was spearheaded by a large number of parent advocacy groups who witnessed the squalid living conditions in these facilities and demanded court-mandated safeguards for those living in institutions. This work coincided with a rise in self advocacy, where people with disabilities agitated for their own rights, and was compounded by support from institutional staff members who witnessed the human rights abuses in these facilities up close. This advocacy reverberates into the present as activists continue to fight for this dark and overlooked part of American history.

“There is an enormous growing coalition of disability rights people who see this is a galvanizing example of why denying us the access to our history is in of itself a form of cruelty,” says Green, who has a history of mental illness which has closely tied him to his work and helped inform the way he processes what he learns. “I see another history where I’m just another person in that graveyard. There is a personal level.”

MASSACHUSETTS’S DEPARTMENT OF CONSERVATION AND Recreation (DCR) manages MetFern, and its groundskeepers trim the grass regularly and erected the cemetery’s first two signs in the early 2000s. These explain what the markings on the gravestones mean, and list the years the cemetery was operational. A makeshift shrine has been erected at MetFern’s center where family members and passersby leave statues, coins, and notes to the deceased.

In the summer of 2019, George Darcy, a Waltham City Councilor, applied for a $80,000 city preservation grant to restore MetFern. Over the coming year, the goal is to transfer those funds to the DCR through a matching grant program; if approved, the DCR will use the $160,000 to restore the cemetery with community input. Darcy’s grant aims to regrade the land, reset the headstones, and place signage at the cemetery’s entrances. Based on designs by Gann students, the signs will offer a brief history on the institutions, list patients’ names, and provide instructions on how to identify each person.

The DCR plans on keeping the gravestones as they are instead of installing new ones with names, as was done at other institutional cemeteries across the state. Being able to see these unmarked stones is fundamental to understanding how these institutions fit into the larger fabric of American society, explains Green.

In February 2021, a bill was introduced into the Massachusetts State House to study the history of institutions for people with disabilities in the state. Co-authored by Green alongside Representative Sean Garballey and Senator Michael Barrett, the bill proposes a disabled-persons-led commission tasked with locating records and graves and issuing a formal report. Green hopes this bill will help reconcile the different approaches taken at various cemeteries across the state to find the best way forward for MetFern.

While MetFern is just one of many institutional cemeteries across the country, it is emblematic of an era and an attitude that continue to exert influence. For Green and other activists, these defunct institutions and their cemeteries are not merely relics of a bygone era, but reminders that the past is never truly far behind us.