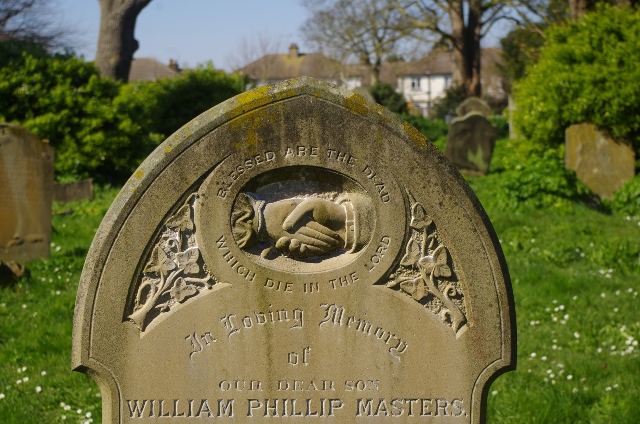 Hello all – I think I can just about get away with still wishing you all a Happy New Year!

Well, here we are in another lockdown and so I won’t be poking about in churchyards or cemeteries for a while.

So I took the opportunity to look through my photos from last year just before the first lockdown when I could still be out and about in local churchyards and cemeteries which I haven’t previously posted.

The above headstone is from All Saints in Frindsbury near Strood. The church perches on top of a hill looking down on the town and its churchyard was recommended to me by an old friend. There were some spectacular views of the River Medway down below as its sapphire stream glinted in the Spring sunshine.. When I got there, the trimming of the long grass around the memorials had literally stopped in mid cut and I had to be careful where I walked. I didn’t want to trip over kerb stones hidden in the long grass.

I found this and, although the shaking hands motif is usually associated with a man and wife saying goodbye, here it looks as though a mother and son are saying goodbye. The hands are those of a man and a woman and, although, the father has been added on at the bottom, the son was the first to be buried there. William Masters died young at only 20 and his mother died 22 years later.

In the shaking hands, the deceased is traditionally holding the hand of the living as they part. It can mean goodbye or the deceased guiding the living into eternal life later. It is usually associated with marriage with the visible cuffs delineating them. The frilly hand on the right hand side is a woman and the left hand one is the man with the plainer, more formal cuff.

It was an interesting churchyard and was also in the middle of two cemeteries – the East and the West. These were mainly 19th and 20th century burials but a bright Spring carpet of primroses and foaming white Blackthorn blossom made them appear colourful and bright.

I will be discussing one of the more enigmatic symbols that I found in All Saints in the next blog.