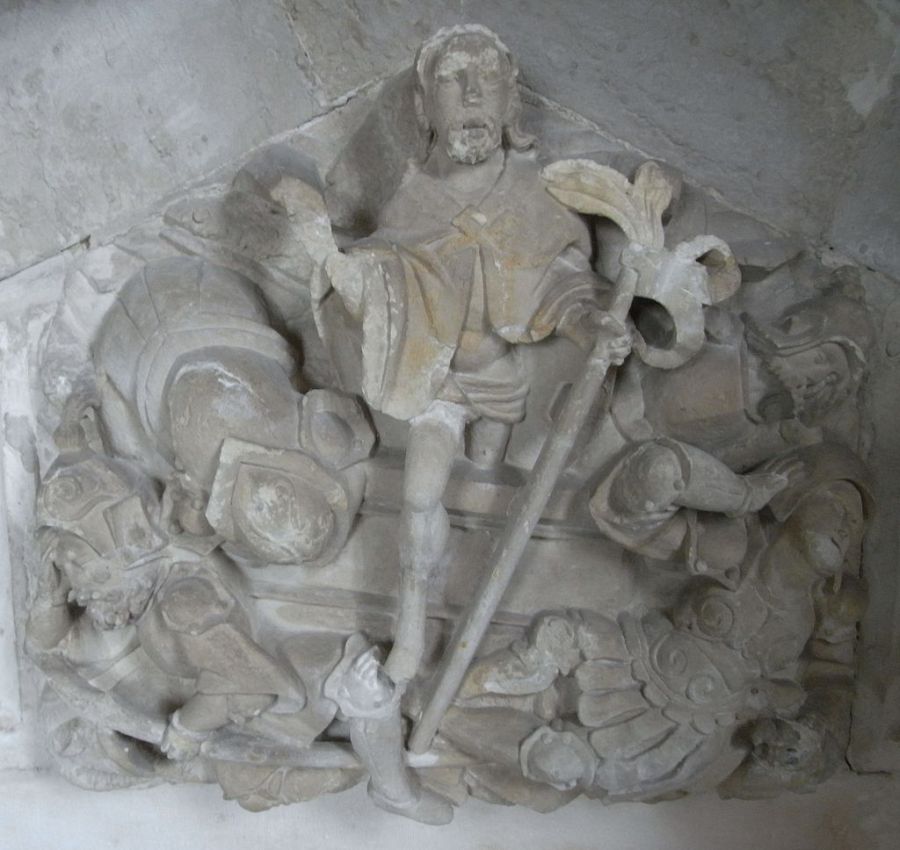 I thought that for this month’s Symbol  it would be good to have one that was specifically linked to Easter. So April’s  Symbol is  the Easter Sepulchre.

Although this is a difficult time for all of us with the worldwide pandemic of COVID 19, life still has to go on despite it feeling a little strange.  Easter is one of the holiest weeks in the religious or faith calendar and in medieval times the Easter Sepulchre would have been an integral part of the celebrations.

However, there are now very few examples of these in churches and only within England and Wales. After the Reformation and Henry VIII’s break with Rome over his divorce from Catherine of Aragon most of them were destroyed. The ones that have survived are to be found in little country churches.    I discovered this lovely example completely by chance when I visited the church of St Bartholomew in Otford, Kent.

Initially I thought that it was a canopied tomb without an effigy.  But the guide leaflet confirmed  that is is a particularly good example of an Easter Sepulchre and bears two symbols; the pomegranate, which was the badge of Catherine of Aragon and the Tudor Rose.  The sepulchre was made from Caen stone and has been dated to the early 16th century. The guide leaflet for St Bartholomew also suggests that the symbols could be a reference to the visit of Henry VIII and Catherine to Otford in 1520 on their way to the Field of the Cloth of Gold in France.  There is a small ledge on the right of the Sepulchre which is assumed to represent Christ’s empty tomb.  As John Vigar says:

‘It was the tomb of an individual erected on the north side of the chancel which over each Easter weekend would be used as a focus for devotion, representing the entombment and resurrection of Christ. It always had a flat surface on which the sepulchre itself would be placed.

However, the stone canopy was not the actual the Sepulchre.  This was a wooden chest containing either the cross from the main altar or a consecrated Host in an ornate container known as a Pyx. Some of the sepulchres were so small that they could only hold the Host.  The sepulchres were part of Easter church rituals from the 13th to 15th centuries and were used in both Catholic and Anglican churches. Each church was only allowed to have one. According to https://www.encyclopedia.com/:

‘In this period the ritual burial of Christ was a solemn observance. At the end of the Liturgies of Good Friday, the priest would carry the pyx and the Cross, both wrapped in linen, to the north side of the chancel where a temporary sepulchre which was usually wooden and draped with a pall had been made ready and laid them within.  The sepulchre was then perfumed with incense and lit by numerous candles as a constant watch was kept to protect the Host and Pyx.  The Host would have been consecrated on Maundy Thursday. Early on Easter morning, candles  would illuminate the church, the clergy would come to the Sepulchre, the Host was removed to the Pyx above the high altar and the Cross was raised from the sepulchre and carried in procession around the church while church bells chimed and the Resurrection was celebrated’.

Henry VIII wanted to preserve the sepulchres after the break with Rome but Archbishop Cranmer passed laws ordering their destruction.  The wooden chests were then put to other uses such as dish racks!  Soon their actual purpose was forgotten.

A more permanent form of the Sepulchre was as a recess, often canopied over a tomb chest.  Wealthy patrons or local families who wanted to be associated with the Easter mysteries often built tombs for themselves that could also be used as Easter sepulchres.  They vary from the very plain to the very ornate as with the one in Lincoln Cathedral.  Often they are not inscribed with the name of the donor and a church could only have one.  It was wonderful to see such a fine example at Otford  as I explored the interior of the church.

Augustus Welby Pugin, the celebrated Victorian architect and designer attempted to revive the Easter Sepulchre and there is a magnificent example in St Giles, Cheadle.  But it was seen as merely decorative.

I’ve always associated Easter with a time or rebirth. Spring is usually on its way by Easter time; churchyards burst forth with Spring flowers and there’s a general feeling of Mother Nature getting on with it. This rebirth has never been so important as it is in 2020 in the light of the pandemic.

2 thoughts on “Symbol of the Month – The Easter Sepulchre”