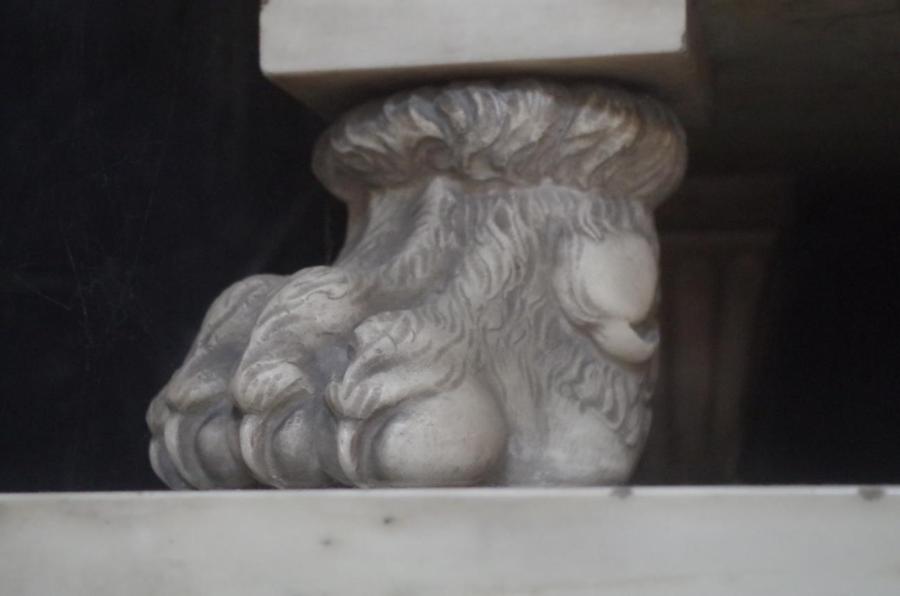 This month’s Symbol is a little bit of fun.

These lion’s feet supporting two sarcophagi within London’s Brompton Cemetery almost look comical – it’s as if they may just get up and run away at any moment carrying their cargo!

But, if you look closely, then you can see how detailed they are especially with the hair around the ankles and the claws. They are unusual as I don’t see them that often. But there are examples to be found in other cemeteries. For example, there is one within Norwich’s Rosary Cemetery.

The sarcophagus is made from cast iron and was originally painted black.  It is dedicated to the memory of Jeremiah Cozens who died aged 32 in 1849.  There are other members of the Cozens family commemorated on different sides of the sarcophagus.  Also, Mrs Bradley’s monument in Elmwood Cemetery, Memphis, Tennessee, USA features a magnificent set of paws.

The lion represents strength which is demonstrated by the paws supporting the sarcophagus. They have appeared as decorative devices in Ancient Greece and Rome. These were often known as ‘claw feet’ or ‘paw feet’ and were usually either a lion or a bear’s foot.  They also appeared during the Renaissance and into the 17th and 18th century in French and English furniture.  This magnificent example dates from the Renaissance.  Although this sarcophagus has been dated to the 5th century the lions paws were added after the 15th century. It comes from Ravenna, Italy.

So the use of lion’s paws probably originated in the Classical world as did the sarcophagus form itself. It’s a stone coffin that was used for burials and the word ‘sarcophagus’ comes from the Greek for ‘flesh-eater’.  With the rediscovery and use of Classicism within Victorian cemeteries such as Brompton it’s appropriate to find two elements from it.  Ancient Greece and Ancient Rome motifs appeared in many Victorian cemeteries and Classicism was one of the first major artistic movements to be represented within them.

These two examples are very plain apart from the wildly extravagant carved hair on the ankles of the paws.  They are both dedicated to women; Catherine Ferrall Carmichael and Charlotte Hooffstetter.

Catherine who died, aged 88, on 21 April 1853 was the widow of Major Hugh Lyle Carmichael.  He was the Lieutenant Governor of British Guiana from 1812 until his death, aged 49, in 1813. According to Wikipedia:

‘He was a strong proponent of giving native Caribbean troops the same rights as ordinary British soldiers.’

He is buried in Demerara where there is a monument to him. This is the link to the wikipeadia page about him: https://en.wikipedia.org/wiki/Hugh_Lyle_Carmichael

Sadly, I’ve been unable to discover anything much about Catherine. There is an epitaph on one side of the sarcophagus of which I can only read two lines so she may have to be a Work in Progress.

Charlotte Hooffstetter is recorded on one side of her sarcophagus as being:

According to an inscription on side of the sarcophagus she lived in Thurloe Square with Charles at what is still a swanky address.  They had one daughter, Sophia, who died in 1854 and Charles Hooffstetter died on 30 September 1870. The names of other family members are inscribed on the other sides of the sarcophagus.  But, again, I can find out nothing more about her. According to Find a Grave even her birth date is unknown and Charles proved to be just as illusory. So Charlotte will have to be another Work in Progress.

I also found a magnificent example on the Henniker monument within Rochester Cathedral.

The sarcophagus and lion’s feet were immensely popular and could be adapted to many other decorative uses.  I found several examples of much smaller sarcophagi and lion’s paws on vintage and antique websites where they were being offered as wine coolers and collarettes amongst other uses.  They would look very good on a sideboard or in a gentleman’s study.

But nowadays lion’s paws are more likely to be supporting an ‘antique’ revival bath tub which is a different container for a body altogether!

4 thoughts on “Symbol of the Month – Lion’s Paws”