This month’s Symbol is a little bit of fun.

These lion’s feet supporting two sarcophagi within London’s Brompton Cemetery almost look comical – it’s as if they may just get up and run away at any moment carrying their cargo!

But, if you look closely, then you can see how detailed they are especially with the hair around the ankles and the claws. They are unusual as I don’t see them that often. But there are examples to be found in other cemeteries. For example, there is one within Norwich’s Rosary Cemetery.

The sarcophagus is made from cast iron and was originally painted black.  It is dedicated to the memory of Jeremiah Cozens who died aged 32 in 1849.  There are other members of the Cozens family commemorated on different sides of the sarcophagus.  Also, Mrs Bradley’s monument in Elmwood Cemetery, Memphis, Tennessee, USA features a magnificent set of paws.

The lion represents strength which is demonstrated by the paws supporting the sarcophagus. They have appeared as decorative devices in Ancient Greece and Rome. These were often known as ‘claw feet’ or ‘paw feet’ and were usually either a lion or a bear’s foot.  They also appeared during the Renaissance and into the 17th and 18th century in French and English furniture.  This magnificent example dates from the Renaissance.  Although this sarcophagus has been dated to the 5th century the lions paws were added after the 15th century. It comes from Ravenna, Italy.

So the use of lion’s paws probably originated in the Classical world as did the sarcophagus form itself. It’s a stone coffin that was used for burials and the word ‘sarcophagus’ comes from the Greek for ‘flesh-eater’.  With the rediscovery and use of Classicism within Victorian cemeteries such as Brompton it’s appropriate to find two elements from it.  Ancient Greece and Ancient Rome motifs appeared in many Victorian cemeteries and Classicism was one of the first major artistic movements to be represented within them.

These two examples are very plain apart from the wildly extravagant carved hair on the ankles of the paws.  They are both dedicated to women; Catherine Ferrall Carmichael and Charlotte Hooffstetter.

Catherine who died, aged 88, on 21 April 1853 was the widow of Major Hugh Lyle Carmichael.  He was the Lieutenant Governor of British Guiana from 1812 until his death, aged 49, in 1813. According to Wikipedia:

‘He was a strong proponent of giving native Caribbean troops the same rights as ordinary British soldiers.’

He is buried in Demerara where there is a monument to him. This is the link to the wikipeadia page about him: https://en.wikipedia.org/wiki/Hugh_Lyle_Carmichael

Sadly, I’ve been unable to discover anything much about Catherine. There is an epitaph on one side of the sarcophagus of which I can only read two lines so she may have to be a Work in Progress.

Charlotte Hooffstetter is recorded on one side of her sarcophagus as being:

According to an inscription on side of the sarcophagus she lived in Thurloe Square with Charles at what is still a swanky address.  They had one daughter, Sophia, who died in 1854 and Charles Hooffstetter died on 30 September 1870. The names of other family members are inscribed on the other sides of the sarcophagus.  But, again, I can find out nothing more about her. According to Find a Grave even her birth date is unknown and Charles proved to be just as illusory. So Charlotte will have to be another Work in Progress.

I also found a magnificent example on the Henniker monument within Rochester Cathedral.

The sarcophagus and lion’s feet were immensely popular and could be adapted to many other decorative uses.  I found several examples of much smaller sarcophagi and lion’s paws on vintage and antique websites where they were being offered as wine coolers and collarettes amongst other uses.  They would look very good on a sideboard or in a gentleman’s study.

But nowadays lion’s paws are more likely to be supporting an ‘antique’ revival bath tub which is a different container for a body altogether! 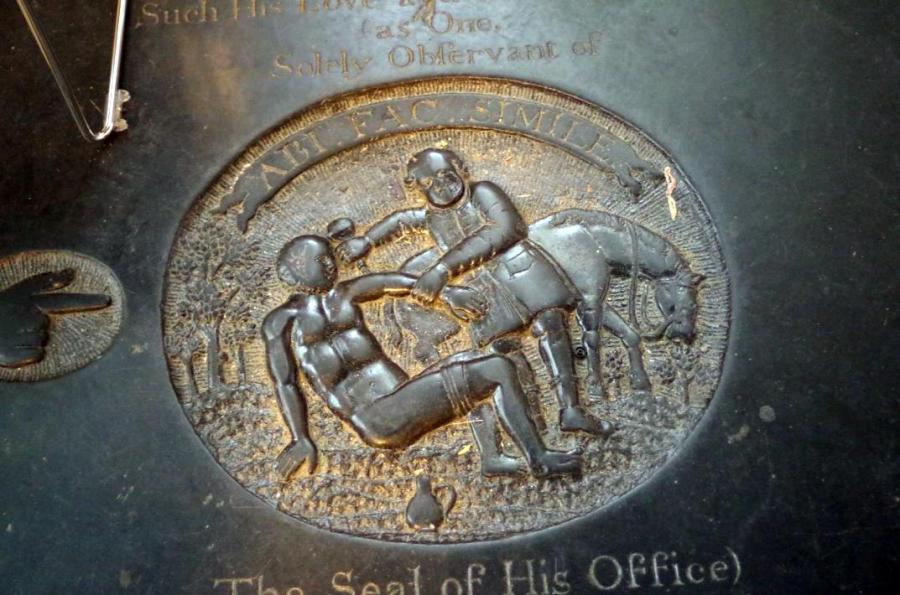 I was exploring Rochester Cathedral recently after visiting The Museum of the Moon temporary exhibition. It featured the Luke Jerram artwork which had travelled there from the Natural History Museum.   This was my first opportunity to have a good look around the Cathedral since moving here in 2019. There was much to see; 14th century Green Men and a zodiac depicted in tiles in front of the altar amongst others.

But it was a guidebook to the Cathedral’s monuments that pointed me in the direction of the Lady Chapel and a grander version of the Good Samaritan symbol.  It’s usually covered by a rubber mat so passing visitors may not even know it’s there.  A helpful Cathedral guide lifted it for me and as it was so busy I only had time to take a few snaps. I have to apologise for the quality of the photos. exhibition.

Someone really wanted visitors to notice the relief as there is a carved pointing finger indicating it.  These are known as ‘manicules’ from the Latin root, ‘manicula’, meaning ‘little hand’  and you can just see it in one of the photos.

This is a wonderful depiction of the Good Samaritan in 3D.   I have read that the figure of the Good Samaritan is based on the incumbent, Frederick Hill, himself.    I can see the reason why it is protected by the mat as generations of visitors feet would soon start to wear it down.  However Mr Hill may not be buried directly underneath the ledger stone that bears his epitaph. But they are usually placed over an actual burial vault.

According to the booklet, the ledger is:

‘an incised stone slab set flush into a stone floor.

This one is considered to be:

‘one of the Cathedral’s finest’

The fulsome epitaph reveals a probable reason for the choice of symbol.   I have corrected the 18th century spelling in which an ‘s’  looks like an ‘f’.  This is called the medial S which was also known as the long ‘s’. This was a second form of the uppercase ‘S’.

To the Memory of

Anno Domini 1720 Married the Widow of

In the most tender

In his PUBLICK Trust

Providing for his Majesty’s Sick and Wounded Seamen

Such His Love and Care for them

The Seal of His Office)

Was his last, as Least Concern;

Much Regretted as Greatly belov’d by all who knew him,

Being a Kind Neighbour, Sincere friend; in Disposition;

Above Guile, and in Practice; an Exemplary Christian.

As you can see, Mr Hill married his best friend’s widow and became stepfather to his children.  He was obviously an important figure in the town and he lived in the St Margaret’s area close to the Cathedral.

I have obtained a copy of his Will via The National Archives.  It’s dated 6 June 1750 and written in flowing calligraphy.  However, I could find no mention of his wife in it so maybe she pre-deceased him.  Mr Hill appears to have been quite well off as he owned land, or estates, in both Southfleet and in the Brompton area of Chatham both of which are in Kent. He appointed his son, Captain Thomas Snarkston, his daughter in law, and Mary Snarkston, spinster, as his joint executors.  The estates were to be sold and the resulting money to be divided between his daughters; Susanna Borthwick, wife of Edward Borthwick, Frances Powney, wife of Mr Powney and Frances Flight, wife of  Major Thomas Flight.  Mary Snarkston was to have the use of all of Mr Hill’s household goods included his plate, china etc for the rest of her natural life. After she died it would pass to Captain Thomas Snarkston, then to Frances Flight and then be sold by the executors and the money divided amongst the aforementioned children.

Susanna Borthwick was to have one of his diamond rings and Mary Snarkston would have the other one.  Two god-daughters, Henrietta Soames and Elizabeth Page were  to have £50 and £20 respectively. With the latter it would be paid on either her 21st birthday or her wedding day. Mr Hill’s gold repeater watch was bequeathed to Captain Thomas Snarkston and 5 guineas each went to Frances Powney and Frances Flight.  Finally after payment of any debts and funeral expenses Mr Hill bequeathed the rest and residue of monies to be divided equaly between Susanna Borthwick, Mary Snarkston, Captain Thomas Snarkston, Frances Powney and Frances Flight.

Mr Hill was a man who appeared to have been as generous in death as he was in life to his adopted children.

Will of Frederick Hill, Gentleman of Saint Margaret Rochester , Kent, The National Archives