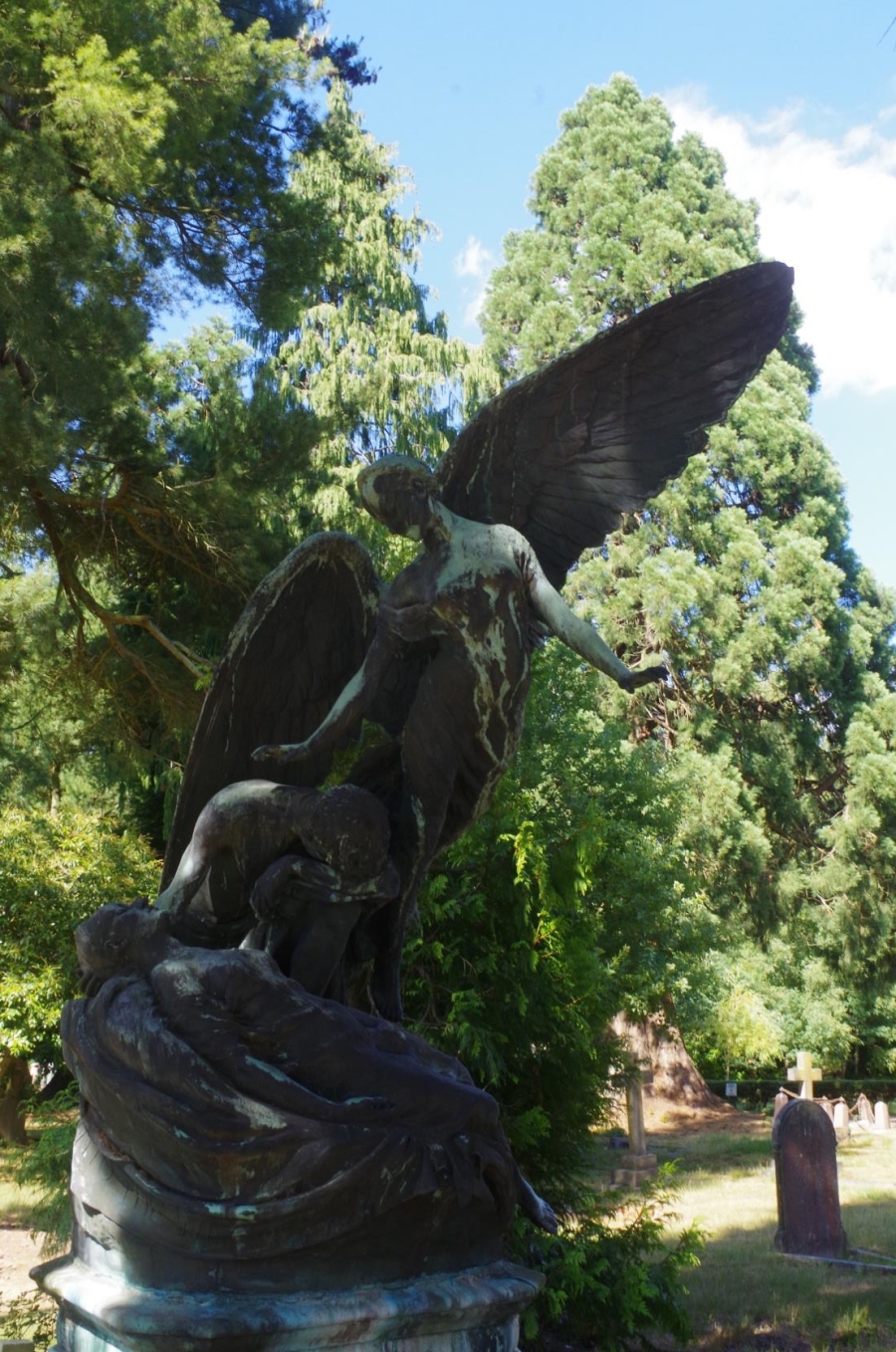 I hadn’t visited Brookwood Cemetery for over 20 years and remembered it being sprawling, vast and with large empty sections. It was the largest cemetery in the world at the time of the creation of the Necropolis Railway and, at 500 acres, is still the largest in Europe.   Under azure skies  during the 2018 hot spell we alighted at Brookwood station and found that the entrance into the cemetery was closed.

So we took a longer route into the cemetery and wended our way through the village  The pub that had been by the station when I last visited was now offices.  I always thought that it should have been called The Coffin’s Rest but it was probably something a lot less amusing.  The cemetery was once privately owned but is now in the safe keeping of Woking Council.  Its first burial was the still born twins of a Mrs Hore who lie in an unmarked grave.  There is an actors section not far from the train station and amongst Brookwood’s permanent residents are Evelyn De Morgan, painter John Singer Sargent, novelist Rebecca West and more recently, the architect of the Olympic Velodrome Zena Hadid. After walking through undergrowth we came upon the War Graves section of Brookwood.

According to the War Graves information board:

As we walked through the different sections with their lines of dazzling white crosses we all felt a real sense of how it must feel to see endless lines of them in France and Belgium.

‘The military cemetery was established just after the end of the First World War and then extended after the Second World War.  It has the Cross of Sacrifice designed by Blomfield and Lutyens Stone of Remembrance as seen in European military cemeteries.

There are also two memorials; the 1914-18 on which is recorded 260 service personnel whose graves are unknown and also the 1939-1945 which records over 3400 men and women of the Commonwealth and forces who dies at sea, in raids on Occupied Europe and also special agents who lost their lives in enemy territory.’

We walked through the American, Canadian and RAF sections and saw that the Chelsea Pensioners were also represented. In fact it was in the American section that the final scenes of the original Omen were filmed. In the distance we could hear gunfire which was presumably from nearby Pirbright army barracks and added to to the scene.

After leaving the military section, a path called Pine Walk led us through the Muslim burial section.  A Muslim has to be buried within 24 hours and when I’d last visited there had only been a handful of memorials. Now it is a large, rambling section and Zena Hadid is interred here.  Minarets and domes held sway here instead of crosses, solemn angels and doves.  However, It was plain to see from one grave that the incumbent was a fan of a certain sport.

By the entrance from the station there is a preserved piece of the original track and Mr Clarke explained that the original rail station was named Necropolis Junction.  Then we set off to follow the Railway’s tracks.

The North station buildings are now long gone although a small sign saying Railway Walk marks the spot. The area is fenced off and was sold off to a group that specialised in above ground burials.  But the platform edge could still be seen through the chain-link fencing.

We then continued the scenic walk along the avenue of towering redwoods for which the cemetery is rightly celebrated.  The shade was very welcome and flitting butterflies accompanied us..  I saw one of the largest Comma butterflies I’ve ever seen gratefully basking on a tall, thick Redwood tree trunk before summoning up the energy to fly on.   Butterflies were everywhere and often air dancing in pairs.  A member of the party briefly saw a rabbit hopping across a path and into bushes.  I said ‘You know you’re in the country now.’

Instead of the vast empty spaces that I recalled,  there are now several religions and sects that have taken over vacant sub-plots and so you will find Catholic, Zorastrian, Muslim and Persian sects nestling next to a Swedish religion’s permanent religions amongst others. A far cry from the Victorian view of never shall they meet even in death from the Bishop of London in the 19th century.

Eventually the large rambling Victorian South station chapel buildings came into view.  The station buildings fell prey to arsonists in the 1970’s and were subsequently demolished.  But the platform has been left in place and a small yew hedge marks what was once the track bed. The station chapel and mortuary chapel are now the home of the Brotherhood of St Edward.  This is a sect which has an Orthodox background and when I last visited had had a healthy number of young members. However, times change and now there are only 4.

We were very fortunate as an elderly Brother, dressed in Orthodox style costume, came out to invite us inside and to show us round their chapel which had been converted from what was the old mortuary chapel. There is a small museum on Brookwood and the Railway housed under the stairs. The chapel interior was far more ornate than I remembered and the Brother indicated the side benches which were in place of pews. They weren’t designed to sit on but rather to perch on. He explained that they usually stand or prostrate themselves during services.  Paintings of icons lined the walls and he explained that modern day icon painters used acrylic paints instead of egg tempura as it was cheaper.  The Brothers produce beeswax candles which they sell from their chapel.

I glanced over at the adjacent building as we entered the chapel as I  could see the lawn where ,on a Brookwood Open Day during the 1990’s, I had bought marzipan chocolate covered coffins from Jean Pateman of the Friends of Highgate Cemetery.

Under the unforgiving sun, we all met at the lodge by the main entrance and enjoyed some welcome shade under trees as well as tea and biscuits. But I noticed a group gathering around something on the ground.  Another Brookwood surprise.   It was the novelist, Dennis Wheatley’s, memorial tablet. The Prince of Thriller Writers as the inscription read.

If you are planning to visit Brookwood allow at least a day to get round it and you may be alone for most of it.  There is a Brookwood Society group : https://www.tbcs.org.uk/ and they hold monthly guided tours.  If you come by train and the cemetery entrance is closed then ensure that you have directions from the station to the main entrance. Brookwood is impressive and well worth the trip!

2 thoughts on “Madam, have you paid the correct fare for that coffin? Part 3 of exploring Brookwood Cemetery and the Necropolis Railway”