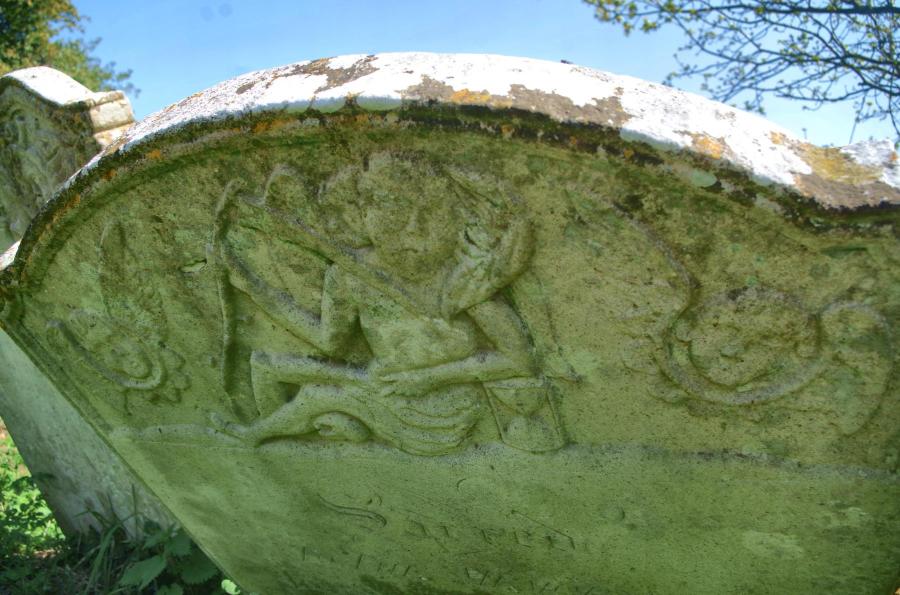 Ah, the perils of searching for symbols in old churchyards. I had to almost lie horizontally on the ground to take a photo of this one in the churchyard of St Nicholas, Pluckley, Kent.  I was a little nervous that the headstone would fall on top of me but what a headline that would have made!

At the time I had no idea what it represented and just thought it looked interesting.  In fact it wasn’t until much later when I’d had a chance to look at it properly that I realised the identity of the figure in the carving.  I then wished that I’d also taken a photo of the epitaph.

It is in fact a depiction of Old Father Time.  It’s a lovely example. As you can see he’s sitting with one hand holding a fearsome looking scythe with a bent and gnarled stem and the elbow of his other hand is resting on an hourglass.  He is a very old man with a white beard, large angel wings on his back and is flanked on either side by two angel heads.  What better symbol for a life that had ended?

So far I have only discovered a few other examples.  There is a 17th century version on a tombstone in a Hendon churchyard and a huge, modern one again resting on an hourglass within Warzaw’s Powarzski cemetery.  I can’t show them in this blog as one is on a stock images library and so not royalty free and I am awaiting permission to use the other image.  However I found this one on Wikipedia but its location is not given.

We traditionally associate Old Father Time with the New Year celebrations. He is the representation of the outgoing Old Year welcoming in the New Year which is usually portrayed as a smiling baby.  But Father Time has also been described as a gentler version of the Grim Reaper as they share the same accoutrements of a scythe and hourglass.

He is considered to be the personification of age and is related to the ancient Greek god Chronos and also the Roman god Saturn. Father Time’s ageing, worn out body is a reminder that time ultimately devours all things and that none can escape.  The grains of sand in the hourglass count out not only his life but all lives.  Although he has a long, white beard, a sign of age, it has been interpreted as a reclamation of purity and innocence.  But, as the hourglass can be inverted, so can a new generation, the New Year, restore the source of physical vitality. However, time is not always destructive as it can also offer serenity and wisdom.

Cronos, from which chronology derives, was the ancient Greeks word for Time and the Romans knew him as Saturn. According to Wikipedia:

‘The ancient Greeks themselves began to confuse chronos, their word for time, with the agricultural god, Cronus, who had the attribute of a harvester’s sickle.  The Romans equated Cronos with Saturn, who also had a sickle and was treated as an old man, often with a crutch. The wings and hourglass were early Renaissance additions.’

The Roman Chronos was originally an Italian corn god known as the Sower and a big festival known as the Saturnalia was held to celebrate the harvest.   So there is a link between these ancient gods and Father Time in that they both symbolically harvest, or cut down the mature crops, to make way for the Spring’s new growth.

Father Time appears throughout many cultures and also in art, books and sculpture amongst others.  In one of Hogarth’s later work, The Bathos, he appears lying down surrounded by his familiar objects, all now broken.

But in St Nicholas’ churchyard  Old Father Time keeps an eternal watch over a life that has ended,  resting on a still crisply carved hourglass.  It is full, the scythe has harvested and so the endless cycle of life continues.

2 thoughts on “Symbol of the Month – Old Father Time”