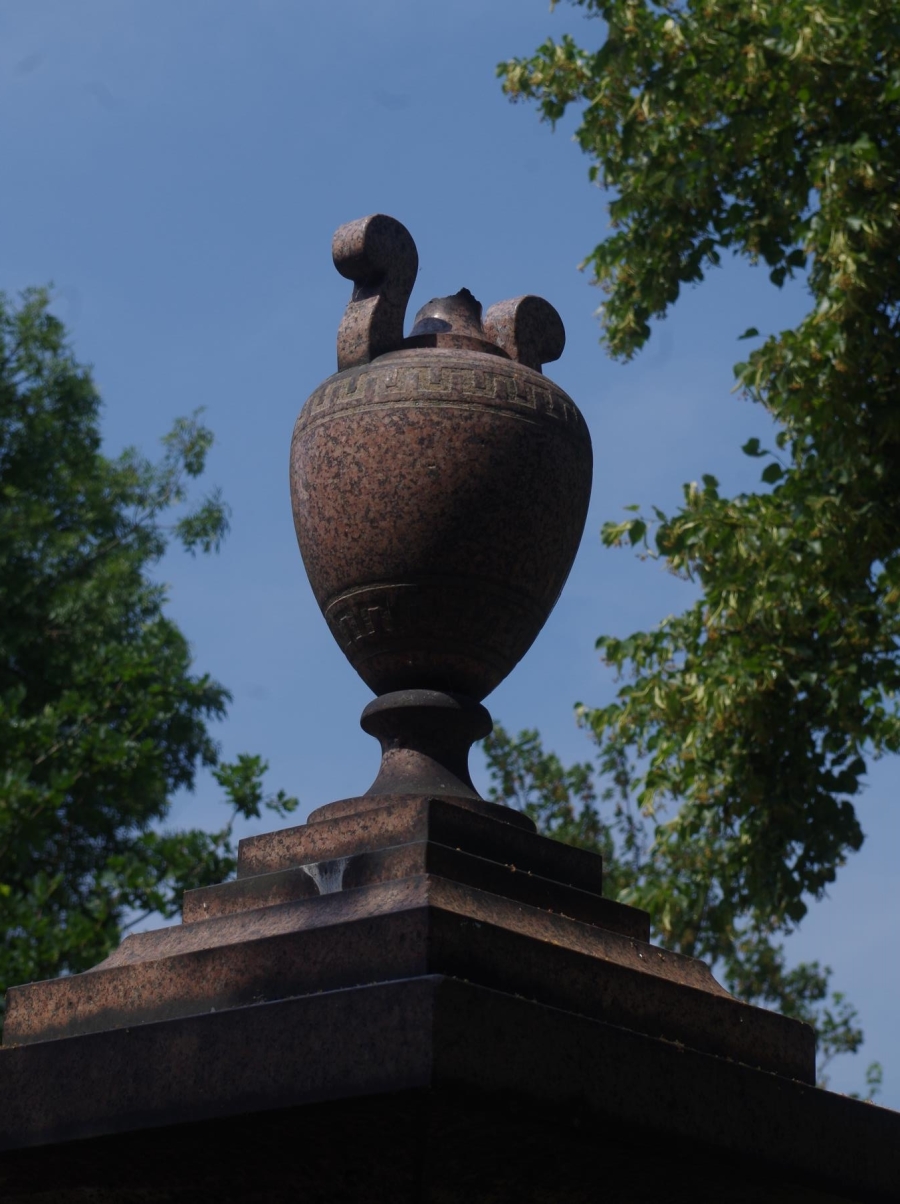 This month’s symbol is one that you frequently see in cemeteries. In fact, in most Victorian cemeteries you’re never more than a few steps from an urn… or two… or three……

These elegant sculptures are usually placed on top of a monument or can appear in 2D relief on a tombstone.

In marble, stone or plaster, they may also be draped with a sculpted piece of cloth or a flower garland. Urns may also have two handles, no handles or what looks like a lid to emphasise its use as a container. In Nunhead Cemetery there is a particularly elegant example with a lovely tassel on the sculpted drapery.

The Victorians loved urns which is why their cemeteries are clustered with them.  They are examples of the Classical movement which was very much in vogue at the time when these large municipal cemeteries were created.  This was an echo of the Greek and Roman eras but the urn as a funerary symbol was known long before them.  However, according to theartofmourning website:

‘…the word ‘urn’ comes from the Latin word ‘uro’ which  translates as ‘to burn’  so no matter what shape the vessel was, its title was always ‘urn’.

Urn was, therefore, the umbrella name for containers of ashes.  It may have been a small box or an elegant vase but as the above quotation says, it was always known as an urn.  Cremation was an early form of preparing the dead for burial as ancient civilisations cremated their dead and put the ashes into containers. In fact, some urns found in China have been dated to 7000BC.  In Central Europe there was what has been described as an Urnfield culture from 1300BC – 750BC which is due to the large cemeteries of urn burials that have been excavated.

The Greeks adopted the use of urns in around 1000BC and the scattering ashes blog has suggested that this may have been:

‘because of soldiers dying abroad in wars or campaigns abroad and this was the only way to return their bodies home to their loved ones.’

After the Greeks, the Romans used cremation as a method to bury the dead until it was superseded by interment within a sarcophagus. But, even then, the urn maintained its status as a symbol of death and the body’s decay into dust. A reminder that, ultimately, we will return to the dust from which we were originally created. So the urn is also a link to the ancient world and its burial practices However, there is an alternative theory put forward on the Lakewood cemetery website in which it’s suggested:

‘The urn is also a symbol of a house or dwelling.  When it’s draped this indicates a house of mourning.’

But, ironically, the Victorians weren’t all that enthusiastic about cremation, despite their love of urns,  until at least the late 1880’s. This is when it was introduced into large London cemeteries such as Kensal Green and West Norwood.

But why are some urns draped?  I often feel it’s almost as though the folds of the drapery are protecting the deceased from the world until Judgement Day although there’s nothing in the urns.   The artofmourning website considers it to be an indication of the death of an older person but I’m not sure that I’d agree with that due to its prevalence in Victorian cemeteries.

The draped cloth has also been seen as the division, the impenetrable curtain if you like, between life and death.  Some drapes can almost resemble shrouds and this can indicate that the soul has departed from the shrouded body.

The urn also appears as a popular motif in mourning jewellery and George Hepplewhite also used it as a symbol on neo classical influenced furniture. It was an indication of taste and of a classical education.

So the next time you’re in a Victorian cemetery why not try and count how many urns you can see or how many times a draped urn appears? It’s a simple symbol to sculpt with and calls down the millennia to our Prehistoric forefathers as they buried their dead in the same way that we do. The ones that I featured in this blog post nearly all came from West Norwood cemetery and were within a short distance of each other. I was spoilt for choice as to which ones I decided to feature.

And you’ll be pleased to know that I’ve managed to refrain by working in the classic Morecambe and Wise joke on a Greek urn…. 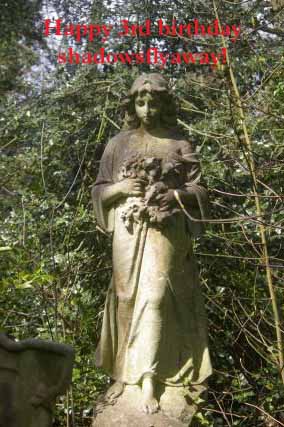 Yes, dear reader, it was three years ago in 2015 that I began this blog.  A complete novice, I set it up in order to talk about primarily funerary symbols which are my main interest and to promote my work in progress which will be a book about them.  One of my great pleasures in life is exploring cemeteries, graveyards and cemeteries to find new symbols to write about. But a word of warning, remember to take a camera with you and take photos of the graves around the one that you’ve chosen otherwise they can be difficult to relocate. I feel that symbols are the deceased’s final message to the world.  It can either be a way to say goodbye or a message of comfort to those left behind.   However, I can only speculate on the reasons for their choice.

But, while writing this blog, I’ve also become interested in the living residents of cemeteries – the wildlife.  Often cemeteries are locked up at night and are usually quiet places which enable wildlife to flourish.  There are often wild areas where the grass is left uncut and these can be a vital lifeline in an urban green space.  They can support many different varieties of wildflowers, butterflies, moths, grasshoppers, dragonflies and also foxes and birds.    At a recent Brompton Cemetery Exploring Butterflies day 13 species of Butterflies were found.  It’s interesting how people use cemeteries as one man enthusiastically recommended Brompton Cemetery’s plentiful supply of blackberries for his smoothies!

So, thanks to my readers and visitors for staying with me over the last 3 years.  I hope you’ve enjoyed my posts, photographs and theories on particular symbols.  There’s plenty more to come including exploring what remains of the Necropolis Railway at Brookwood Cemetery in Surrey, a return visit to Chaldon Church to look at the churchyard memorials and also to the place where my interest in cemeteries began, St Lawrence’s Hospital burial ground also in Surrey and a Roman necropolis surrounded by back gardens in Italy.

And as always there will be Symbol of the Month.  It’s always fascinating to undertake the research for these as there may be several different interpretations of meaning and it can also led into other directions.

So please come with me through either the cemetery gates or perhaps the lychgate to a churchyard and let’s explore together.  There’s a symbol over there that I haven’t seen before and although I’m not sure what it means now I soon will…..