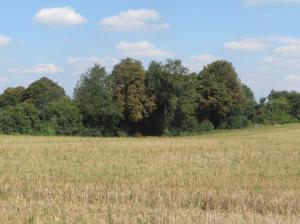 A familiar gap in the trees across field.
©Carole TyrrellThe Victorian iron gates were still in place and seemed to have been cleaned at least as I pushed one open and re-entered Netherne Hospital cemetery.  Someone had thoughtfully hung a wind chime from the other gate.

There had been  blue August skies above me as  I’d plodded up Woodplace Lane again.  The suburbs of Coulsdon and Hooley soon petered out to give way to fields.  I lost my bearings around the newly expanded Netherne on the Hill.   But I retraced my steps and found myself at the entrance of a large ploughed field and saw a gap in the trees on its opposite side.

I began to walk across the field towards it. As I did so 3 or 4 policemen and women walked past the entrance. ‘Yes, we’ve found her, she’s visiting the cemetery, it’s ploughed so no damage to crops otherwise we’d have suggested that she walk around the border.’ said one into his walkie-talkie.  ‘Doesn’t look like a ghoul.’ They walked on and I wasn’t sure whether to be flattered or insulted – me a dangerous person?  Obviously the neighbourhood watch had been on duty and I wondered what had been going on at the cemetery.

A defiant purple branch of buddleia stood tall over the wait high wildflowers as a white butterfly fluttered around it. Bright splashes of colour from ragwort, scarlet pimpernel, speedwell, red sorrel and fleabane stood out amongst them.  There were also fresh puffballs and older ones half hidden in the undergrowth.

The birdsong stopped as I stood inside the graveyard and looked around.  It didn’t look as forgotten as it had done in 2007. The cemetery had been cleared but was now rampant again with summer vegetation.  There was now a clear border around it which made it easier to explore. The horse chestnut trees still stood tall with bright shiny conkers here and there beneath them.  At the bottom of the cemetery was a luxuriant bush of ripe elderberries and I looked over the hedgerow to see two horses grazing in a nearby field.

It still seemed incredible that 1350 people were buried here but now the cemetery felt less abandoned. I looked again at the 6 memorials set into the concrete plinth, presumably to preserve them, but at least I now knew why the 7 year old Betty Trotman had been buried there.

In 2010, the developers of the Netherne on the Hill site had claimed in a local newspaper that they had never been approached by any family members of the people buried there.  But in 2013, a Croydon paper reported on the 2 and a half year campaign by two local people, an amateur historian called Adrian Falks and a Ms Wendy Mortimer.  They had both called for the cemetery to be cleared and the graves within it to be maintained.

Ms Mortimer knew that she had a great-aunt, Frances, who had been buried there in 1915 and had been extremely upset when visiting the graveyard in 2008 to find her last resting place to discover how overgrown the site was. She had had to crawl under a fence to actually get inside to find 5 feet high brambles and no memorials.  Ms Mortimer’s great-aunt, Frances, had been an epileptic, which at the time wasn’t properly understood and appropriate treatment didn’t really exist.  Frances had become brain damaged after falling from a wall, presumably during an epileptic fit, and had subsequently been sent to Netherne where she was classed as ‘an idiot’ in the less than PC classification of the time. A photo in the paper shows Ms Mortimer kneeling in the middle of the then cleared cemetery beside flowers in memory of her great aunt. It was a tragic tale of a life ruined which nowadays with the correct medication would have been very different.

As I walked around the edge of the cemetery I could see holes dug by animals, presumably foxes. Again in 2010, it was alleged by another Croydon paper that burrowing animals had dislodged some of the remains buried there and that bone fragments had been found.

Due to the war hospital scheme which displaced the asylum population in order to treat nearly half a million wounded or shell- shocked soldiers, some of which are buried here.  There are also the children of serving soldiers interred there.

I am indebted to Adrian Falks’ research on the soldiers who were buried at both Cane Hill and Netherne Asylums.  However, the names of most of the servicemen remain hidden in closed records.  But here are the stories of two of them who are buried at Netherne.:

In 1914, Gunner William James Carpenter joined the army for a better life.  But he found Army discipline was too tough and  often went AWOL which led to constant disciplining.  William finally deserted just before being sent to France in 1915. But after an argument with his wife he left their Peckham home and vanished for nearly 90 years.  He had died alone in Netherne hospital but it’s unknown how he ended up there.

Until 1962 a German POW, Hermann Albert Schnid, was buried there.  He had contracted syphilis which was treated at the hospital and he’d died there in 1917.   In 1959, the German War Graves Commission wrote to the Netherne authorities requesting that his body be exhumed and moved to the Cannock Chase German military Cemetery in Staffordshire.

Mr Falks also discovered the names of a few of the children of serving soldiers who were buried in the cemetery. He was quoted in a newspaper article as saying that he thought the state of the  cemetery was ‘shocking’ and ‘that all but one of the children buried at Netherne had had fathers who were fighting in the First World War.’

Some of the children are:

William Arthur Simmonds aged 15 died 15/10/1917 – his father was presumed killed at the Battle of Arras.

Both of her parents, Dorothya m

William John Newland – aged 15 – died from pulmonary TB on 18/02/1918. I found his case particularly poignant as he was an orphan without next of kin who had been transferred from an Epsom workhouse infirmary. I hoped that someone was with him when he passed away.

And finally Betty Trotman, aged 7, recorded on the Book of Life memorial as having died on 31/05/1929 after a 5 month stay in Netherne.  It had been surmised that her parents probably worked at the hospital.   I am indebted to a local resident who had searched for more information on Betty’s family via genesreunited.  Both of her parents, Dorothy and Charles were Londoners and have moved to Godstone in Surrey.  They married in 1921 but it’s not known if Betty had any siblings.  Dorothy died in 1991 aged 90 and Charles preceded her in 1959 aged 65.

Asylums were often overcrowded and an epidemic such as influenza or TB would soon spread amongst patients.

I haven’t found any photos of these incumbents in Netherne cemetery which is sad as I would have liked to be able to put faces to the stories  I stood there in the hot August sunshine and realised that under the wildflowers were people with names, Jean, William, Betty, Frances, etc who had all ended up in Netherne often because there was nowhere else for them to go. But some of the once anonymous dead had been reclaimed by their relatives and they no longer rested alone and forgotten.

But one of the saddest and most moving stories is undoubtedly that of 8 year old Jean Barboni  who died in Netherne in 1915 and whose nurse mourned him for the rest of his life.

Part 3 – the nurse that never forgot the little boy she cared for and a patient’s remarkable artistic legacy.