The Square and the Compass is a symbol which is traditionally associated with the Freemasons and appears on their insignia. It’s also an important part of their teachings.  The two elements together form a hexagram which often has the capital letter G inside it to denote God.  However, the ones that I found didn’t have this so perhaps it is a regional or international variation.  But there is a another interpretation of the motif which may be more appropriate to a funerary emblem and let’s not forget that these are also an architect’s tools of the trade

The Freemason association is the most obvious and common.  They’re often seen as quite a secretive and shadowy organisation. ‘It’s all leather aprons and funny handshakes.’ seems to be the opinion of many people.  But according the Freemasons UK website they define themselves as’

‘the world’s largest and oldest non-religious, non-political, fraternal and charitable organisations…rooted in the traditions of the medieval stonemasons who built our cathedrals and castles.’

They also claim to ‘make good men better’ by encouraging to live their lives according to the Freemasons Five Values of Integrity, Kindness, Honesty, Fairness and Tolerance.’

They use the Square and Compass in Masonic rituals to teach symbolic lessons.  Wikipedia says ‘

in which he defines ‘The square to square our actions and the compass to define boundaries and to circumscribe and keep us within the bounds of mankind.’

There is also a further, somewhat florid definition on the Masonic Lodge of education website which may make for further reading. As they point out, the square is often used in everyday language such as in ‘getting a square deal and, possibly a mason’s comment, ‘squaring off.’ It also appears in earlier texts such as Confucius. However, the square and the compass aren’t exclusive to the Freemasons as they are also used by several other fraternal organisations both in the UK and abroad.

But I prefer the definition of the symbols project in which they point out that both the square and the compass are measuring instruments and so represent judgement and discernment. The compass draws circles which are a symbol of eternity and also infinity. However the square can be viewed as being material and representing ‘fairness, balance, firmness’ and also:

‘something that is stable and a firm foundation to build upon’

They are a union of the material and of the spirit represented by the hexagram that they form.  So perhaps this is the spirit leaving the earthly plane and going into eternity i.e. from earth into heaven. It’s certainly another way to look at it.

But who knows? The people who chose to use the Square and the Compass on their tombstone may have been Freemasons or maybe not.  There was only one that I felt might have been one because of the quotation above the motif on his cross but this turned out to be a quotation from an 18th century hymn. With the others it was impossible to say.

You don’t see this symbol all that often although I discovered one in Brompton Cemetery and a sprinkling of them in Beckenham Cemetery recently. Interestingly, this is also a cemetery with several Salvation Army burials as well. Here is a gallery of the ones I found within Beckenham Cemetery:

I enjoyed researching this symbol as, although it seemed to be have an obvious association, it was also fascinating to find out other suggestions.

Long-winded but worth a look 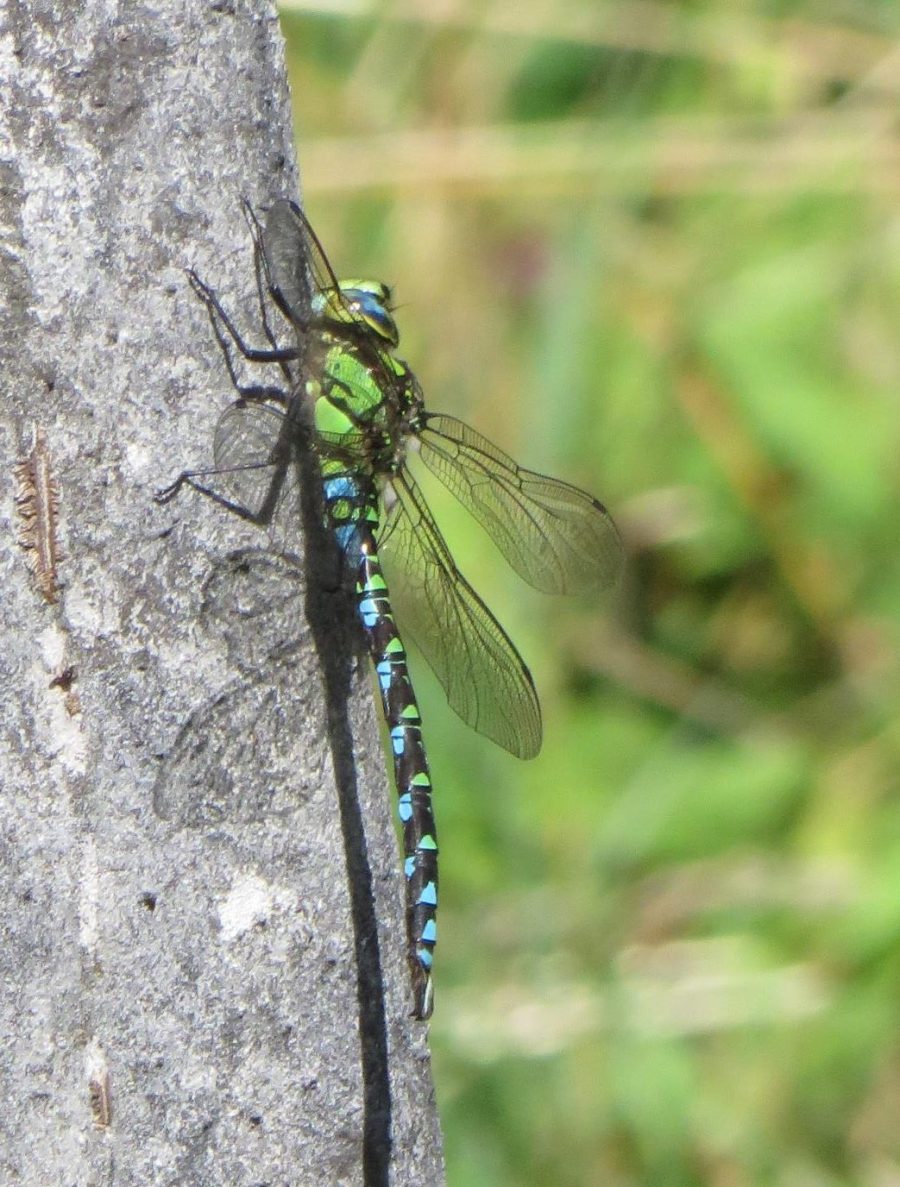 With gossamer wings which turn into tiny rainbows under the sun’s rays as they pose on trees and tombstones and incredible acrobatic flying displays dragonflies and damselflies are regular visitors to my local churchyard.  And 2017 has been an incredible year for spotting them.

I don’t think that a chucrwarden in St George’s, Beckenham, believed me when, in 2016, she found me trying to capture a Southern Hawker  which was conveniently posing on a  lofty yew branch..   But this year, I have seen so many in there that it did become a regular part of my day to walk through and look for them.

I would watch in amazement at their aerodynamics and speed as their 4 wings whirled furiously like helicopter blades as they flew at speed.   However, they would also fly at a more leisurely pace around and around before, tantalisingly, they would veer off into the foliage of trees to vanish from sight.  It would often be the bigger dragonflies such as Southern Hawkers that I would see on the wing but also as the summer moved on, Common Darters began to appear.

Often a dragonfly would obligingly land on a tombstone or lower branch and I noticed that they were particularly attracted to evergreens such as yews.  This might account for their attraction to cemeteries and graveyards.

Here’s a selection of my favourite images of dragonflies and damselflies from both cemeteries and churchyards:

This is a Southern Hawker from 2016 and was seen it in St George’s churchyard, Beckenham.

This is a male Emperor from Kensal Green cemetery, London in July 2017. I spotted him/her flying around above The Meadow section which is left uncut around the monuments and tombstones during the summer to encourage wildlife such as butterflies, In some parts it’s very damp underfoot hence the dragonfly I thought. It evaded my attempts to photograph it until, near the entrance as I was leaving, it landed temporarily on an ivy clad monument.

These are two damselflies from Beckenham Cemetery’s Garden of Remembrance pool from July 2017. From July –August it is a magnet for red and azure damselflies.  They look almost like tiny, coloured sticks floating on the breeze and I caught these two ovipositing i.e. laying eggs.  The upright one is laying the eggs and the other is holding it steady.

Again from St George’s but from 2017, I waited patiently until this beautiful male Southern Hawker landed and helpfully rested on a tombstone.  It stayed there for a few minutes until it got fed up and flew off again.

This is a Common Darter and I saw several over the summer this year in the churchyard. For some reason they were particularly attracted to the pink granite monuments – a cool surface on a hot summer’s day?

I enjoy looking out for them and on one occasion last year the angle at which the dragonfly was perched on a yew branch and the way in which the sun shone through its wings made them look as if they were made from burnished copper.

So do look up when you’re next visiting a cemetery or churchyard on a warm summer’s day and you might be surprised.  I’m looking forward to what the summer of 2018 might bring already!