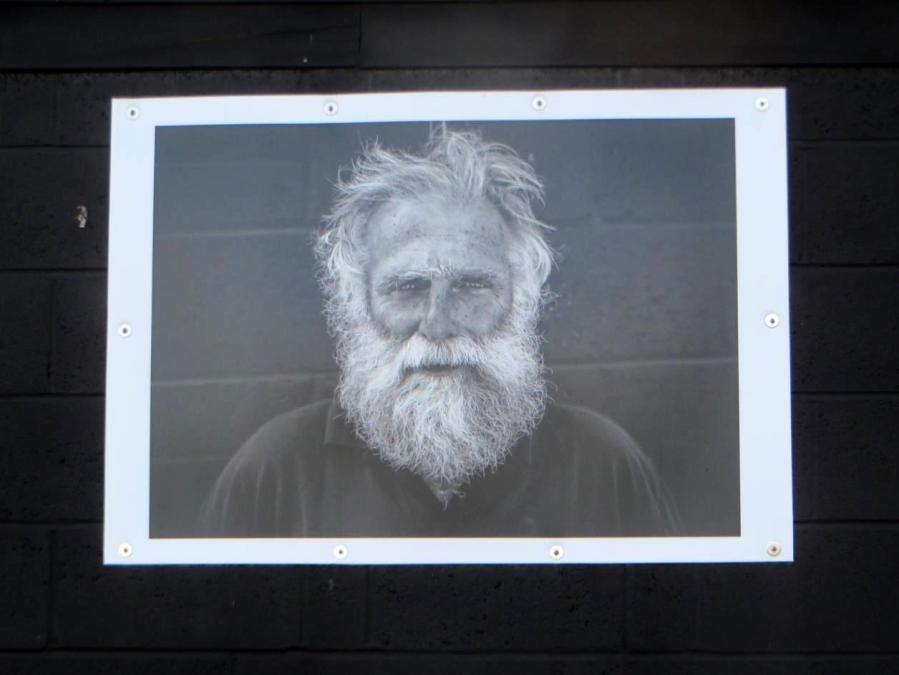 It was the striking monochrome photo that made me stop to look at this memorial on a day trip to Hastings this month. I’d admired the brand new pier and then wandered along the beach to the fishermen’s section commonly known as the Stade.

The photo was of a man whose tough outdoor life showed in his face and had obviously been a Hastings fisherman. He’d earned his livelihood from the sea in both calm and storm tossed waters with his boat as his only protection as it sailed its course, gulls shrieking overhead for any rejected catch. And then returning to the pebbled Stade at sunrise to offload the catch which would be sold at the Fishmarket later that day.

Beard died aged 68 and may have ended his days as ‘the boy on shore’ which meant that he was no longer able to go out on the boats but, instead, helped bring them ashore or sorted out the catch and nets. He looked quite a character in his photo and I felt that it really captured him.

Hastings fishermen have had the right to use the Stade free of charge for over 800 years. In fact, Stade comes from the Saxon for ‘landing place.’ There are usually 25 boats on the beach and it’s the largest beach launched fishing fleet in Britain. There’s always gulls here looking for any titbits and amidst the pebbles are the usual paraphernalia of fishing; nets, ropes and cuttlefish cages. Near the promenade and the Fishermen’s Museum are the unique tall, black tarred Grade II listed sheds used for storage.  The boats have to be hauled from the sea after each trip so cannot be longer than 10 metres and care only able to travel a few miles.  This makes for an ecologically friendly method of fishing.

But ask any fisherman and he’ll tell that, with quotas and costs,  it’s becoming more and more difficult to make a living from the sea.  In Hastings, there’s also the clash between an old established working community which occupies a large section of valuable land in the Old Town and property developers.  The fishermen strongly opposed the building of the new Jerwood Gallery on part of the Stade.  In fact, ‘No Jerwood’ was the message on one fisherman’s shed.

However, I couldn’t find out much about Beard apart from a brief obituary in the Hastings Observer dated 3 June 2016. It merely said that he’d died peacefully at home on 15 May 2016 and donations were to be given to either the RNLI or Cats Protection.  Under the online condolences was one from a breakdown recovery service who described him as

‘a very jolly, helpful man who will be missed  by the people who knew him…heartfelt condolences and sympathy to all the family.’

So he had a family and was obviously well liked but Beard may have been one of a vanishing breed.   The photo that caught my attention made me wonder about Beard and his life. Memorial benches can often feel very anonymous as there’s usually only a small plaque with a few details but Beard’s photo gave you the man as well.

RIP Beard – may you sail on calm seas forever.

©Text and photos Carole Tyrrell except for photo of Beard. The photographer is unknown.