It was the striking monochrome photo that made me stop to look at this memorial on a day trip to Hastings this month. I’d admired the brand new pier and then wandered along the beach to the fishermen’s section commonly known as the Stade.

The photo was of a man whose tough outdoor life showed in his face and had obviously been a Hastings fisherman. He’d earned his livelihood from the sea in both calm and storm tossed waters with his boat as his only protection as it sailed its course, gulls shrieking overhead for any rejected catch. And then returning to the pebbled Stade at sunrise to offload the catch which would be sold at the Fishmarket later that day.

Beard died aged 68 and may have ended his days as ‘the boy on shore’ which meant that he was no longer able to go out on the boats but, instead, helped bring them ashore or sorted out the catch and nets. He looked quite a character in his photo and I felt that it really captured him.

Hastings fishermen have had the right to use the Stade free of charge for over 800 years. In fact, Stade comes from the Saxon for ‘landing place.’ There are usually 25 boats on the beach and it’s the largest beach launched fishing fleet in Britain. There’s always gulls here looking for any titbits and amidst the pebbles are the usual paraphernalia of fishing; nets, ropes and cuttlefish cages. Near the promenade and the Fishermen’s Museum are the unique tall, black tarred Grade II listed sheds used for storage.  The boats have to be hauled from the sea after each trip so cannot be longer than 10 metres and care only able to travel a few miles.  This makes for an ecologically friendly method of fishing.

But ask any fisherman and he’ll tell that, with quotas and costs,  it’s becoming more and more difficult to make a living from the sea.  In Hastings, there’s also the clash between an old established working community which occupies a large section of valuable land in the Old Town and property developers.  The fishermen strongly opposed the building of the new Jerwood Gallery on part of the Stade.  In fact, ‘No Jerwood’ was the message on one fisherman’s shed.

However, I couldn’t find out much about Beard apart from a brief obituary in the Hastings Observer dated 3 June 2016. It merely said that he’d died peacefully at home on 15 May 2016 and donations were to be given to either the RNLI or Cats Protection.  Under the online condolences was one from a breakdown recovery service who described him as

‘a very jolly, helpful man who will be missed  by the people who knew him…heartfelt condolences and sympathy to all the family.’

So he had a family and was obviously well liked but Beard may have been one of a vanishing breed.   The photo that caught my attention made me wonder about Beard and his life. Memorial benches can often feel very anonymous as there’s usually only a small plaque with a few details but Beard’s photo gave you the man as well.

RIP Beard – may you sail on calm seas forever.

©Text and photos Carole Tyrrell except for photo of Beard. The photographer is unknown.

I was on a summer stroll in early July of this year in Kensal Green Cemetery when I noticed this symbol.  From where I was standing it resembled a mop head which had dried out and been left on top of a grave.  I was planning to carry on stalking obliging butterflies but curiosity got the better of me and I made my way over to the monument. It was then that I realised that the supposed mop head was in fact a beautifully sculpted wheatsheaf.

‘Had the deceased been a master baker?’ was my first thought as it’s a traditional symbol associated with them or perhaps a pub owner as you do see a lot of pubs called The Wheatsheaf. The epitaphs on both side of the tomb were virtually unreadable. However, on one side I could make out ‘Sarah’ and on the other ‘Milnes’. But more of the Milnes later as this family has a strong connection to Kensal Green Cemetery

A sheaf is a tied bunch of grain stalks after they have been harvested by hand with scythes. However with the advent of agricultural mechanisation it is now a bygone image. No-one has ever known the origins of this staple crop and so it has been regarded by many cultures as a gift from God.

The wheatsheaf and resurrection

However, the wheatsheaf symbol has always had strong associations with the theme of resurrection.

This seemingly humble grain has played its part in many funeral cults and mourning rites throughout ancient cultures. For example, the ancient Greeks and Romans regarded it as life springing from death or immortality. Priests are reputed to have sprinkled wheat flour on their victim’s head prior to sacrificing them.  Ceres and Demeter, the Greek and Roman goddesses of harvest and agriculture, often carried either a wheatsheaf or a harvester’s sickle.  Ancient Egypt was seen as the breadbasket of the ancient Mediterranean due to the volume of crops that it produced and Osiris, god of the underworld, was strongly associated with wheat within the context of a representation of rebirth.

Wheat is also important to the Christian religion with the Eucharist bread which represents the body of Christ and his sacrifice and also in remembrance of the Last Supper. There is the famous biblical quotation from Luke 22:19:

‘and he took bread and gave thanks, and brake it, and gave unto them, saying, This is my body which is given for you: do this in remembrance of me’ King James Bible.

When wheat is harvested the ground is left to lie still during the winter and then re-sown in the spring to begin the cycle of life again. Here it represents renewal and renewal as the cycle of seasons has once more given grain for bread.  There is also the association with the harvesting of years in that Death and his scythe prepare to reap at the end of life.

So there has always been an association with the wheatsheaf of resurrection and remembrance. This is where it is at its most powerful as a funerary symbol. However, Douglas Keister has also suggested that a wheatsheaf on a tombstone can indicate someone who

The wheatsheaf and the Victorian cult of mourning

According to the art of mourning website, the wheatsheaf was also a very popular motif in Victorian mourning jewellery.  In fact they have suggested that it could be seen as a memento mori in that it denotes life cut and renewal or resurrection of the soul.  Its heyday was during 1820-1860 and it also survived into early 20th century mourning jewellery just as it was going out of fashion.  The wheatsheaf was often found in mourning wreaths, brooches, lockets and rings and was an effective emblem when working with hair to create these pieces.

There is also a stained glass window featuring a wheatsheaf at St Michael & All Angels in Eaton Bishop, Herefordshire but this may be a Victorian addition by Kempe after restoration.

But who lies under the Kensal Green wheatsheaf?

This grave contains 2 women who were, respectively, the first and second wives of the Victorian sculptor Thomas Milnes.  He is buried with his third and final wife elsewhere within Kensal Green cemetery under a far plainer stone. He certainly lived a long life – his dates are 21 December 1810 – 6 May 1888 but there’s no wheatsheaf on top of him. Milnes completed a number of funerary monuments which can be seen in churches in Gloucestershire, Cumbria and Suffolk and also statues which still stand in Norwich and Woolwich. Milnes exhibited statues and busts at the Royal Academy after entering its schools on 21 April 1841.  He also designed another monument in Kensal Green, the horse and child on top of Alfred Cooke, which, although damaged, is still in place.

However he wasn’t destined to became a major British sculptor despite, in 1858, being invited to design and model the four lions for the base of Nelson’s column.  It would have been the commission of a lifetime but his designs were deemed ‘unsuitable’ and the commission went to Sir Edwin Landseer’s monumental symbols of Empire instead.  However, Milnes lions which are, in my opinion, more lively and playful than Landseer’s can be seen in Saltaire, near Bradford.  After that he seems to have sunk in obscurity.

The ‘Sarah’ that is still legible on one side was Milnes’ first wife: Sarah Betsey Harrad. They married in London on 19 May 1836.   Sarah died on 1 April 1867 of ‘apoplexy’ which is now known as a stroke or cerebral haemorrhage.  Frances Eidsforth became his second wife on 16 July 1867 at St Georges, Bloomsbury and she died on 16 July 1875. She is buried with Sarah.

Milnes married his third and final wife, Jessie Anne Fletcher, on 1 June 1876 but there were no children from any of his marriages

Little seems to be known about either Sarah or Frances and it’s a real shame that their epitaphs, presumably on either side of the monument are now illegible.  However I would assume that the wheatsheaf placed on top of them is a symbol or resurrection and a hope that they would all meet again in eternity.

The wheatsheaf is remarkably well carved and has outlasted the epitaphs. It has been presumed  that it is by Milnes himself but no definite proof has been found to be able to attribute it to him with certainty.

There is another smaller wheatsheaf in Kensal Green which is on the Samuel Horsley memorial.

These two examples are from Oak Grove Cemetery, Fall River, Massachusetts, USA – I don’t have any further details on them unfortunately.

I am indebted to Henry Vivian-Neal from the Friends of Kensal Green Cemetery for the biographical details on Thomas Milnes. 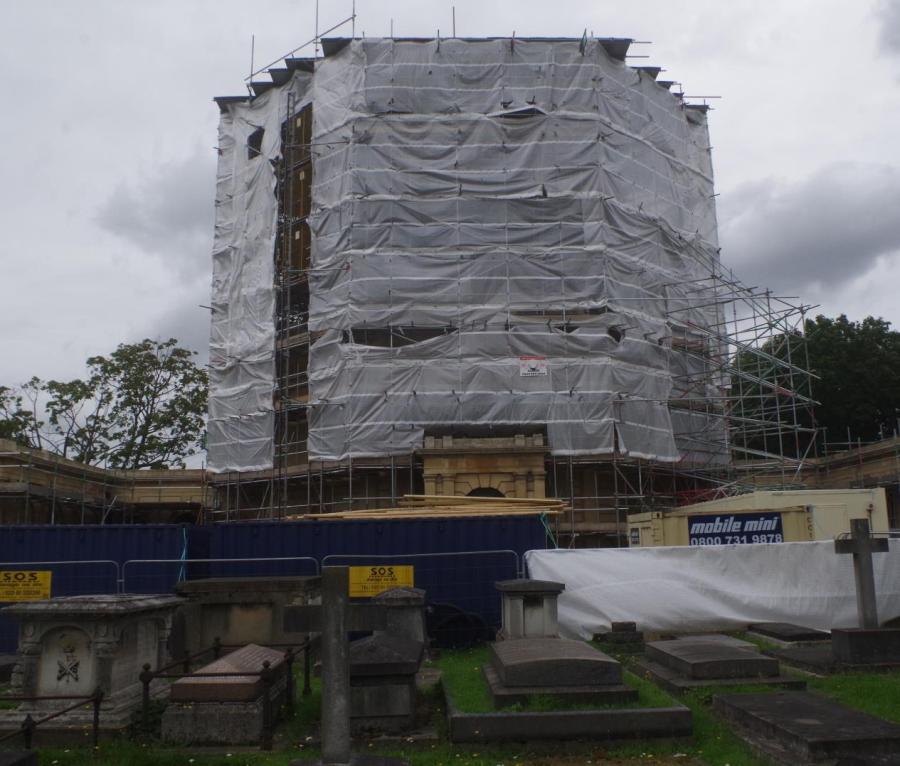 As part of its major restoration project , Brompton Cemetery held a short series of free walks  around the cemetery last month to discuss future plans.  I joined one which was led by Nigel Thorne, Project Manager and Halima Khanom, Partnership and Community Engagement Officer for the Royal Parks..

The weather had been dull and overcast all day but, as we gathered at the South entrance project office, blue sky suddenly burst through the clouds and it became a lovely golden summer evening bathing the chapel and monuments in a soft glow.  A relief really as we were out in the open throughout. Nigel was very enthusiastic and knowledgeable and began by revealing that Brompton had received an impressive grant of £6.2 of which £4.2 had come from the Heritage Lottery Fund (your £1 lottery ticket does something useful after all even if it doesn’t make you a millionaire) and the rest had come from Parks for People.

He added that he saw cemeteries as another form of public space which I’d not previously considered and an aspect that maybe isn’t emphasised enough.  Brompton is already well used as a cut through with joggers much in evidence and people on the edge of the group huddled in so as not to be entangled with cyclists.

Nigel indicated where Brompton’s original owners had run out of money and the lonely cupola above a colonnade marked the spot.

A fascinating walk – our thanks to Nigel and Halima – which covered not only Brompton’s ambitious restoration plans but also some of the problems of cemetery maintenance and restoration.