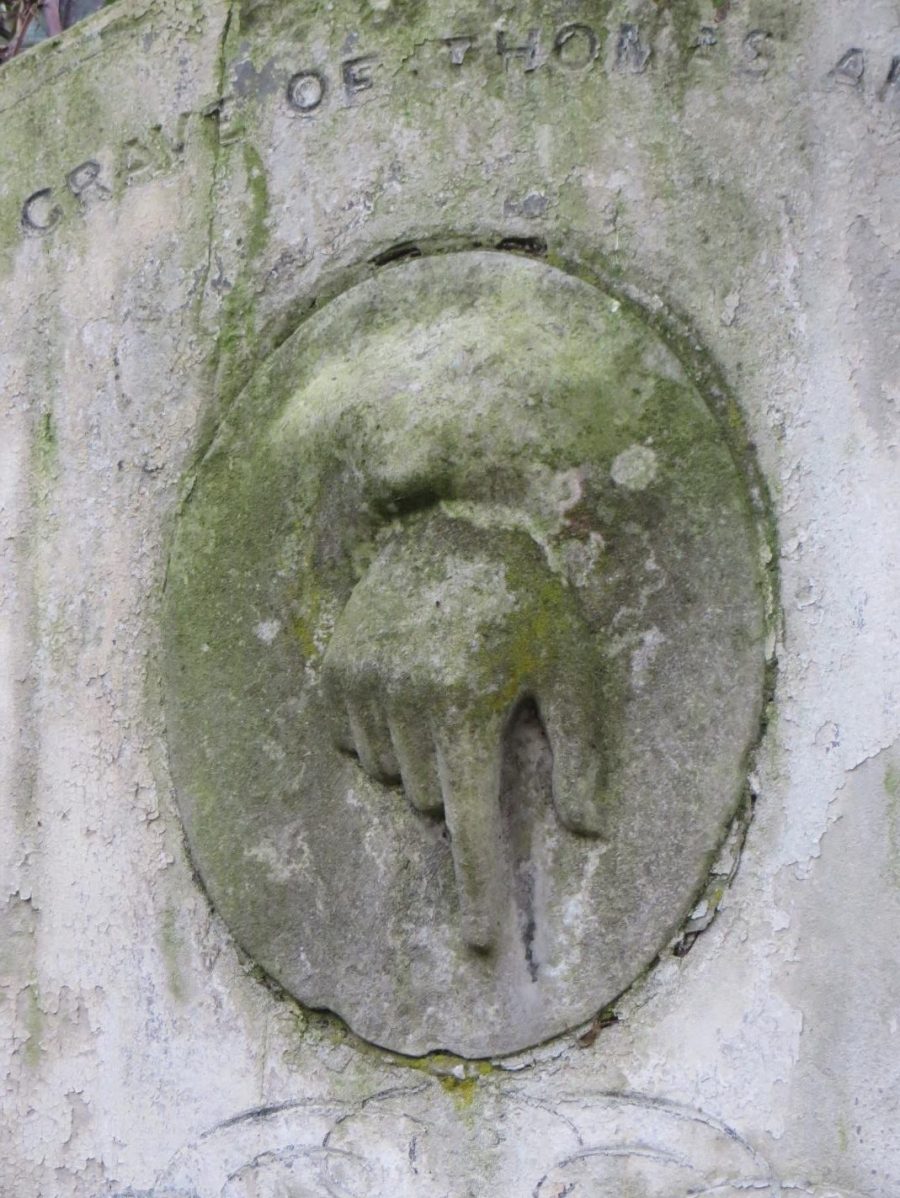 In my  recent post on the Pointing Finger symbol I was bemoaning that I hadn’t found an example of the downward pointing version.

Someone must have heard me because, lo and behold, as I was pottering through Brompton Cemetery I suddenly saw one.  It was on a side path and set back from it in front of a thick clump of brambles which probably engulf it when they’re in high season.  Winter is always a good time to  look for symbols as the encroaching ivy; brambles and long grass will have died down and don’t obscure them.

There is a fascinating story behind this memorial as it’s the tale of two Irish brothers who first enlisted together at the tender age of 11.  They both had action packed lives in military service together until one died before the other at a young age.  This confirms what I said in my previous post,  that the downward pointing finger denotes an untimely, sudden or unexpected death.

The headstone   announced that it was the ‘Family Grave of Thomas Anderson’ and there are six members of the family commemorated on it.  The first one was to Andrew Anderson, who was a sargeant in the Coldstream Guards Band until died suddenly, aged 35, on August 11th 1856.   Sadly it doesn’t give the cause of death so we can only guess at what might have happened to Andrew. The epitaph also says that his death was ‘regretted by all who knew him’ so he was obviously popular and much missed.  Accident?  Heart attack? Murder?  We may never know but I may do some further investigating.

Underneath  Andrew’s epitaph are recorded two more members of the Anderson family.   These are Thomas Anderson’s  ‘infant daughter’,  Alice Jane, who died at 17 months on November 19th 1859 and also his wife and Alice’s mother, Euphan.   She died on September 22 1888 aged 63.   The quotation underneath reads ‘Sleep on dear one and take thy well earned rest.’

Initially I presumed that Thomas was Andrew’s father.   But, after doing some online delving, I discovered a post on an Irish library forum by a respondent who claimed to be Thomas’s great, great, great grandson. He was trying to carry out his own research into the family history.

According to him, Thomas and Andrew Anderson were actually brothers, probably twins, who were both born in 1821 and came from Ennis, County Clare.  This would fit in with Andrew’s age at death and there were other coincidences  between the information on the headstone and what the great, great, great grandson  was saying. The unusual name of Thomas’s wife was helpful and this led me to the Clan McFarlane website as McFarlane was her maiden name.

The brothers were very close and, aged 11, they both enlisted in the 40th Regiment of Foot on February 2 1832 and were then both discharged on 7 September 1839 aged 18.

It was the Royal Navy that beckoned next and they set off for adventure on the high seas aboard HMS Wellesley when they enlisted in 1839.  They both played their part in the Opium War of 1839 – 1842 and, as a result, they both received the China War Medal.  This was awarded to members of the Royal Navy who had ‘served with distinction’ between 5 July 1840 – 29 August 1842.

After that they moved on and back into the Army which is where the Coldstream Guards connection comes in.  As you might expect they both signed up: Thomas on 8 May 1850 and Andrew on 8 May 1844.  Thomas was discharged on 17 May 1860 after becoming a  lieutenant.  We know Andrew’s story but Thomas’s is less clear.

According to the family member he was living at 6 Hospital Street in Glasgow in 1845 and married Euphan McFarlane in 1863.  She came from the Gorbals which always had a reputation as a really tough area and so good preparation for the life of an Army wife.   She and Thomas had three more daughters; Elizabeth Euphan, Rosina Edith and Rosina Elizabeth.  But there’s no mention of Alice Jane.  Both Elizabeth and Rosina Edith married.

But the family member didn’t mention Alice Jane or John so one wonders where they fit in.

Thomas supposedly died in Middlesex  but after his death he joined Andrew in Brompton Cemetery.

There are two more Anderson Family members recorded on the headstone; John, Thomas’s son, who died on 15 February 1925 aged 65 and John’s daughter, Isabella, but  her dates were too indistinct to read.

Family stories can change over time as they’re handed down through the generations   but this seemed to tally with the information on the headstone.   I am trying to contact the great, great, great grandson via the County Clare forum for more information.

The Anderson brothers seemed to have led exciting lives in military service and  certainly did their bit for King and Country. So rest in peace Andrew and Thomas – you have certainly earned it.