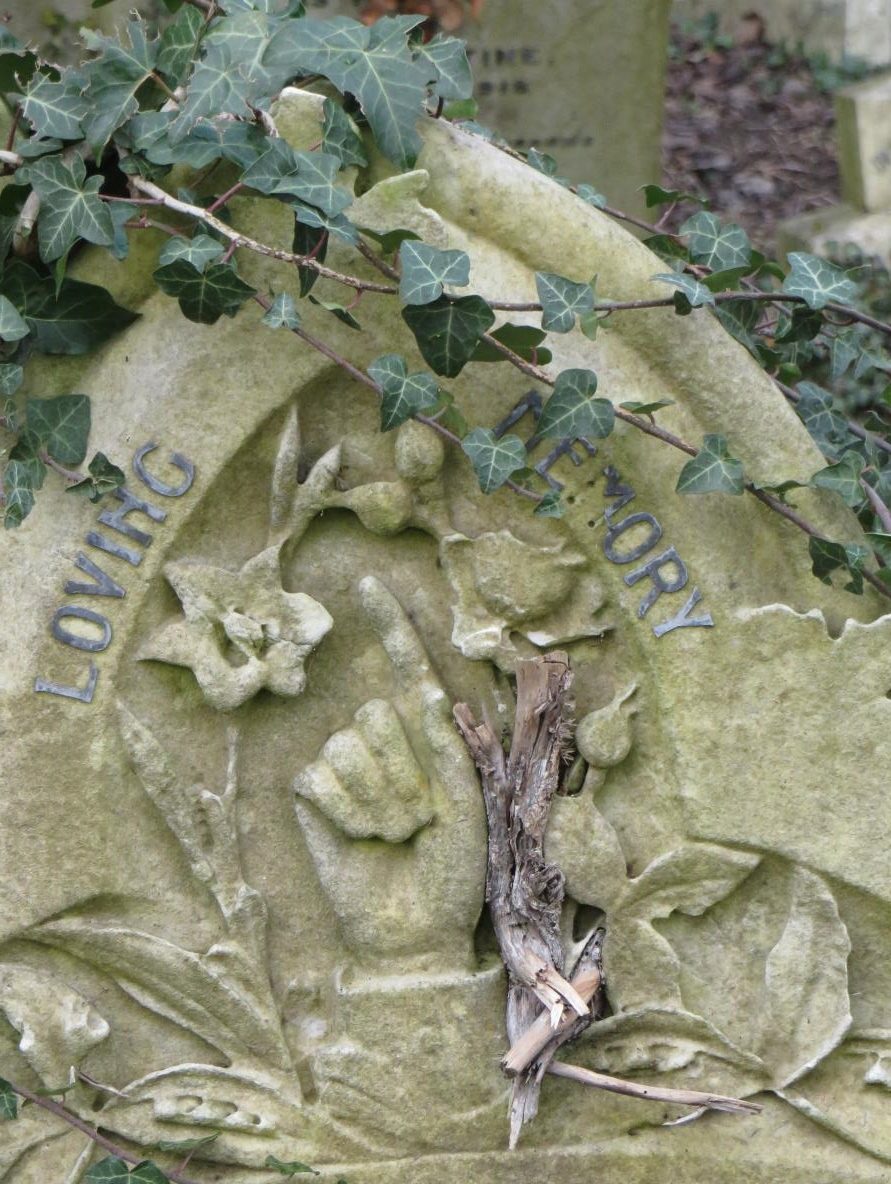 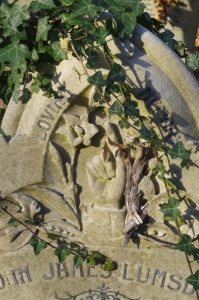 This is a more unusual symbol although hands often feature as motifs in cemeteries usually in the more familiar clasped hands..

The Pointing Finger is usually  one finger,  the index one, pointing upwards or downwards. On the three that I saw, it was the right hand that was being depicted with the remaining fingers and thumb turned down into the palm.   I have yet to see the downward pointing version but rest assured that it doesn’t indicate that the departed is going ‘down below’ or to Hell.  Instead it can signify an untimely, sudden or unexpected death. As you’ve probably already guessed, the upwardly pointed finger is meant to reassure the grieving family that their loved one has ascended to Heaven and has received the reward of the righteous.

However, I found these three lovely examples in Beckenham Cemetery during a recent visit, much to my surprise, and they made me wonder why it isn’t more popular. In all of these the pointing finger and hand are surrounded by flowers.

The first one is  to John James Lumsden who died on 25 November 1903 aged 63.  It’s very well carved with a daffodil on one side of the hand and two sprays of Lily of the Valley flanking the hand.  When I first saw it, a thick branch of ivy obscured the flower on the other side of the daffodil. But on a return visit in January 2017 the branch had been trimmed back and a rose with one full blown bloom and a bud was now visible again. The bud is significant as it often appears on childrens  graves to symbolise a life unlived, that never fully bloomed and was ‘nipped in the bud.’ But not on this one.

In floriography or the language of flowers the daffodil is an important representation of resurrection.This is because of its association with Easter, rebirth and renewal.   The Lily of the Valley is also associated with Spring as its month is May. Other qualities that the Lily represents are chastity, purity and the return of happiness. It’s mentioned in The Song of Solomon 2.1

‘I am the rose of Sharon

And the lily of the valley.’

There’s also the legend  that Mary’s tears turned into the lily of the valley at the exact spot when she cried at the Cross so an alternate name for the flowers is ‘Mary’s tears.’  The Lily is also meant to have healing powers and has other nicknames such as ‘Jacob’s Tears’ and ‘the ladder to heaven’.

This is to Charles Henry McKay who died on 1 November 1910 at only 23 and was the only son of Charles and Ellen McKay as it states on the epitaph. Although the flowers surrounding the pointing finger and hand are the same here as on Lumden’s, on this one they are more stylised and 2D.  They would have mourned his short life and unfulfilled ambitions.  So there is an added poignancy to the rosebud as his was a life cut short.   There is also the word ‘GONE’ carved on the cuff of the hand which emphasises that he has gone to a better place.   It really stood out amongst its neighbouring grey stones so it may have been recently cleaned or restored.

There is a third memorial featuring the pointed finger which is in the same style as Lumsden’s but not as well kept.  .This was to  ‘Will, eldest son of William and Sarah Greenfield. Born 10 December 1874 died 1 August 1905’

Again, another memorial to a life cut short as Will died aged only 31.Three other members of the Greenfield family are also commemorated on the headstone.

To our eyes they could be seen as sentimental but I found them very touching with their aim to comfort those left behind through the use of flowers.

But here’s a mystery from my own local churchyard:

This is to a woman who died at 38 called Georgiana Margaret Barns and it has a pointing finger on the headstone. But instead of pointing upwards or downwards, it’s pointing to the left and apparently into thin air.  The hand appears to have a woman’s lacy cuff and I noticed that, although her husband’s dates are also recorded, he isn’t actually buried there. Instead he lies in Hilderstone churchyard in Stafford.  He died at 76 nearly 20 years after his wife.   Is the finger pointing towards his resting place?  Is it a personal symbol known only to them?  I found a few details about them online but not much more so I am intrigued and mystified by this one.

I have to admit that The Pointing Finger symbol does remind me a little of a palmist drawing of the hand but in the ones that I’ve seen it’s also very decorative and moving.

2 thoughts on “Symbol of the Month – The Pointing Finger”