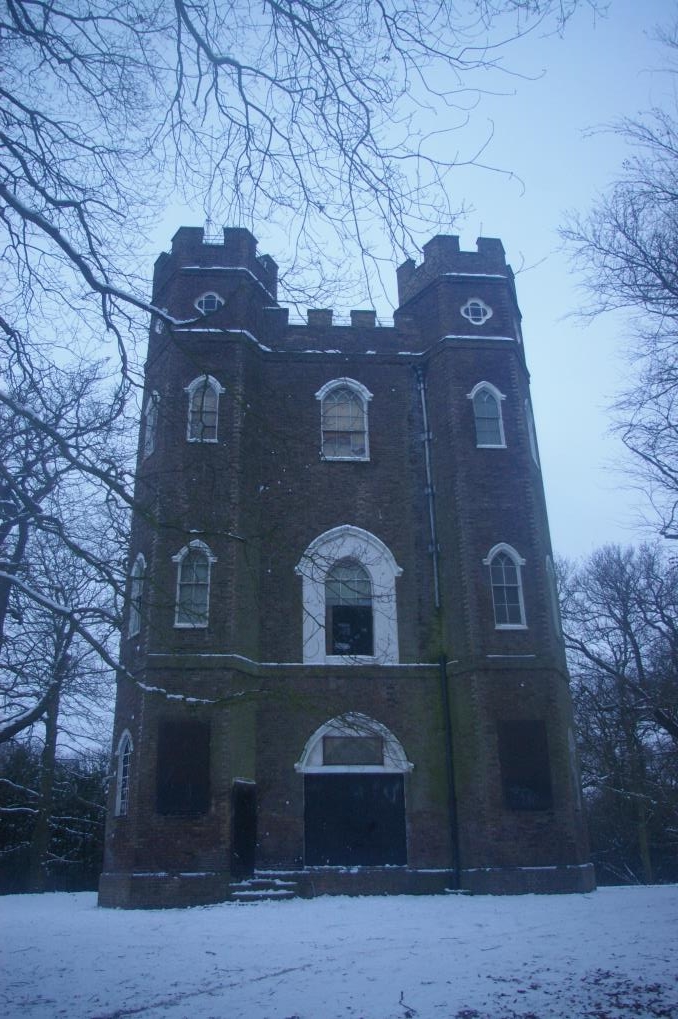 Severndroog Castle hides teasingly behind its cover of ancient trees but it can be seen from miles around if you know where to look.  It perches on its hilltop, looking down and over the suburbs and landmarks below as it has done since 1784.   But it’s not a proper castle.  Instead Severndroog is one of the largest memorials to a single person ever created and is a much loved local landmark.

But, after walking up Shooters Hill, following the sign post and following the paths bordered by verdant hedges and a field you may start wondering where the Castle is.  And then as you round the path’s curve the Castle begins to slowly, almost reluctantly, come into view.  The only sound is birdsong or perhaps a dog walker calling to their dogs and you’re in the midst of one of the oldest woodlands in London.

The Castle nestles within Oxleas Wood which is reputed to be 8,000 years old and you’re aware that the outside world has retreated completely. In 2004, ‘Alice Through the Looking Glass’, was performed nearby in the woods on a lovely summer’s evening. Tweedledum and Tweedledee, Humpty Dumpty, the White Knight, even Jabberwocky, appeared and disappeared before our very eyes as they led us through the dark forest.

Severndroog almost belongs in Alice. It’s dainty, a fairy tale creation of a castle. A triangular building with hexagonal turrets at each corner, it was designed by the architect, Richard Jupp who was known for creating light houses.  It stands 63 feet or 19 metres high and has been compared to Horace Walpole’s magnificent Strawberry Hill as they shared similar decorative features.  These include circular windows and decorative ceilings.  The battlements and turrets are why Severndroog is called a castle, although it was never designed to be a fortification. Instead it was originally a summerhouse and a memorial. It was known as Lady James’s Folly after the woman who had it built in 1784.

She was the widow of Sir William James of the East India Company who defeated pirates and captured the brigand castle of  Suvarndurg, hence Severndroog, an island fortress of the Maratha Empire on India’s West Coast between Mumbai and Goa in 1755. . A plaque over the entrance to the Castle commemorates this although it’s not that easy to read now. He died of a stroke on his daughter’s wedding day in 1783 presumably after receiving the bill..

Lady James filled the first floor of the Castle with mementos of him and would sit amongst his swords, armour and clothes to remember him.  If you look up at the doorway of one of the oddly proportioned rooms you may see some very decorative original Georgian artwork.  Now the room is used for weddings but was empty when I last visited and you could still see the dumb waiter from the Castle’s days as a tea room set into its floor. Locals could still recall enjoying a cuppa and then spending a penny to climb the spiral staircase to the roof.

Lady James bought the highest land in Eltham and reputedly had the Castle constructed within sight of her own house.  It stands at least 40ft further above sea level than the cross on top of St Paul’s Cathedral. From Severndroog’s roof you can, on a clear day, see 20 miles in all directions and across 7 counties over the treetops in 360°.  As a result of this advantageous vantage point, Severndroog was used as a radar station and air raid lookout during the Second World. A barrage balloon floated above the Castle during the war and, due to the leafy covering of trees, it might still be there.  However, there have been pirates aboard Severndroog but manning illegal radio stations from a turret.

Lady James died in 1798 and the Castle passed through various owners. But there’s always been plans for it. In 1847 there was a proposal to build a 10,000 catacomb cemetery in terraces on the site and in 1922 the London County Council bought it and opened the first tea room.  Eventually in 1986, it became the property of Greenwich Council who boarded it up and left it.  Vandalised and abandoned, in 2002, the council suggested that it be leased to a property developer to be converted to dull offices. No doubt the shopping centre was next. A preservation trust was formed, the Castle appeared on BBC’s Restoration and slowly the Castle came back to life.

I first visited the Castle when it was still boarded up.  It completely enchanted me as soon as I saw it.  I only knew that it was a folly but nothing of its history and how it came to be built.  I remember thinking that it would have been perfect for Rapunzel with its tall walls and turrets.  I revisited it during the heavy snows of 2010 when its dark walls stood out starkly against the bare trees and branches and the surrounding white.  On both visits it seemed like a secret castle, my own personal one.  The spectacular view over the rose garden below its slopes is breathtaking as the suburban sprawl stretches into the distance.

In June 2016 I revisited the Castle after its restoration and renovations.  It had re-opened on 20 July 2014 with a new ground floor tea room and the rooms had been spruced up.   I re-climbed the 86 steps of the spiral staircase to the roof to admire the view once again.  The Millennium Wheel on the horizon, the 02 on my right hand side with the Thames snaking past it and the view just stretched on and on.  Below us was the tree canopy as parakeets swooped and screeched amongst the branches.

Severndroog is one of my favourite places in London and I would love to live there. Imagine climbing the spiral staircase every day to lob missiles at any marauding property developers or letting down my newly acquired hair extensions to allow friends to climb up to the roof to admire the view.    As I climbed down the staircase again I thought how pleased Lady James would be that the Castle is still there, still being used and admired and preserving her husband’s memory and her vision.

(this page contains local people’s memories of the Castle and show what a well-loved building it has always been. 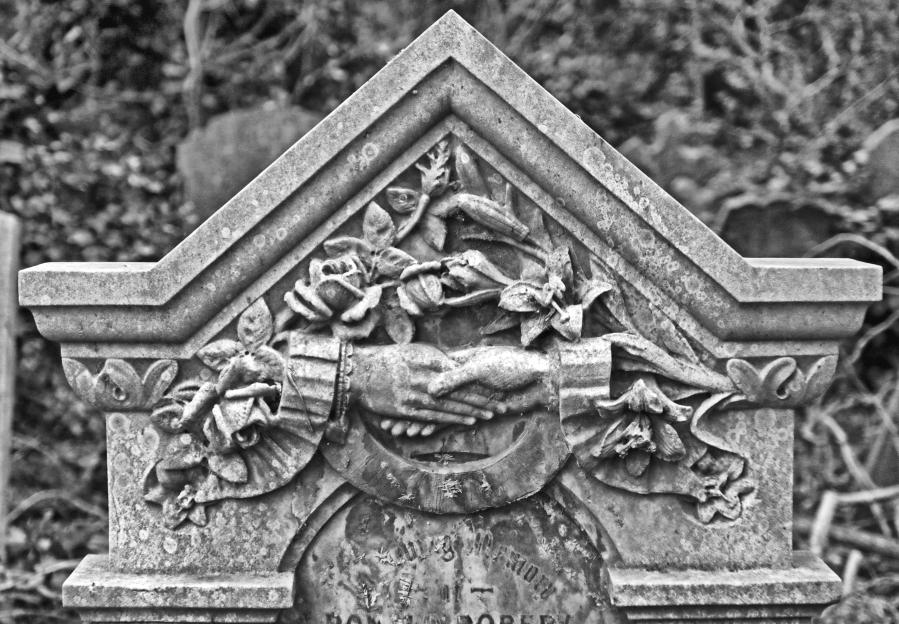 This is one of the most common symbols in a Victorian cemetery and visitors on my tour often ask about it. Initially the handshakes may all look the same but, if you look carefully, there are differences. Although a handshake is a traditional way of saying goodbye or farewell, as with other  funerary motifs, it can have several meanings.

For example,  it can signify the parting of a wife from her husband or vice versa and this is demonstrated by the fact that on several examples that I’ve seen there are two carefully delineated cuffs.  One will have a more attractive, perhaps a frilly one, with the other having a plainer one to indicate the husband.  This emphasises a marital connection or at the very least a close bond.  It has also been suggested that the deceased person is holding the other’s hand to guide them to heaven.

This epitaph is to Eliza Pavey and the differentiation of the cuffs can be seen quite clearly on the handshake. Also his right hand clasps her open right hand with his fingers overlapping. On this tombstone it confirms marriage or a close bond between individuals, unity and affection even after death.  There is also a saying above it which reads ‘We shall meet again’.  Eliza left behind a sorrowing husband who clearly wanted the comfort of knowing that they would meet again in the after-life.  Note the ivy leaves surrounding the handshake which indicate evergreen or everlasting.  She died at 54, which is quite a young age at which to die, and her husband, Robert, outlasted her by another 20 years.

A particularly striking and beautifully carved example is on the Edward Roscoe Mullins vault. There are several examples within Nunhead Cemetery but these are the best in my opinion. Mullins was a Victorian sculptor and began his career working with classical themes and then moved onto municipal sculpture such as on Croydon Town Hall amongst others.  This has been extremely well sculpted, in my opinion, with the two hands and cuffs being sharply defined.

The handshake can also be a representation of hope as there is a suggestion of meeting again in the afterlife. 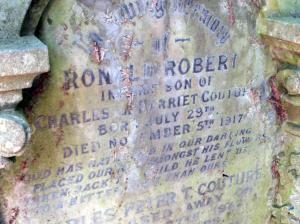 This is the poignant memorial to Ronald Robert Couture who died in his infancy at just over 3 months old. The handshake is garlanded with flowers; roses which represented love, beauty and hope and also daffodils which meant regard in floriography, the language of flowers.  There is a rosebud in the garland which often appears on childrens memorials.  It represents a life unfulfilled, a rose that never opened and bloomed.  There is also ivy entwined around the two pillars. This beautiful and elegant monument to an obviously much wanted and much missed child would indicate that here the handshake is a hopeful sign.

The handshake may also be a reminder of ‘see you soon’ from the deceased to their sorrowing close relatives which may not be as comforting as it sounds with the Victorians high mortality rate.

Ultimately, the handshake is a symbol of comfort and reassurance from the departed to those left behind and in the case of Ronald Couture, that his brief life was not forgotten.