This is one of the most intriguing and baffling symbols to be found in any cemetery.  Visitors are mystified as to its meaning and inspiration and there has been a lengthy discussion about it recently on a cemetery related Facebook page.

It’s tucked away in Nunhead Cemetery and, despite being given directions by Robert Reinhardt, a Facebook friend, I couldn’t find it.  He had posted images of it online and I was immediately intrigued.  But I couldn’t locate it despite making several visits.

But, as luck would have it, I was in Nunhead Cemetery again, looking for another memorial altogether when there it was, hiding in plain sight.

It’s a memorial to Catherine Cook, beloved wife of James Cook as it says on the epitaph, with the motto ‘The Spring of Life is broken’ and   the carving above it with a lovely border of carved ivy leaves  representing ‘evergreen’ or ‘eternal.’

But let’s digress for a moment.  This is a well carved leaf spring which is one of the earliest forms of suspension in a wheeled vehicle. Leonardo da Vinci used them in his own design for a self-propelled car.   The one of Mrs Cook’s tombstone is an example of a multi-leaf spring in which leaf springs of varying lengths have been stacked on top of each other, sometimes up to 20 at a time, to enable the vehicle’s load to spread more widely. 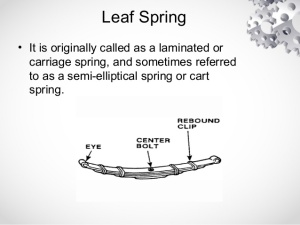 I found the above diagram of a leaf spring online on various sites and it explains how it works.

But why is it depicted on an obviously much missed wife’s tombstone?

My own theory, and it is only my theory  is that it’s a variant on the  broken column.

This is an example of a broken column from Nunhead Cemetery.

The column isn’t the result of vandalism but has been deliberately created like this.  It indicates that the departed, often a male, was the head of the house and now the support of the family, or its backbone, had gone.

So I feel that this could be a female version.  Mrs Cook was obviously the support to her husband and family in that the suspension, the object that made the family load easier to manage, has gone.

Since finally discovering it, I’ve come to admire it as a unique and affectionate tribute to a much loved woman.

You are completely free to disagree and to offer your own interpretation and I’d be very interested to receive them.